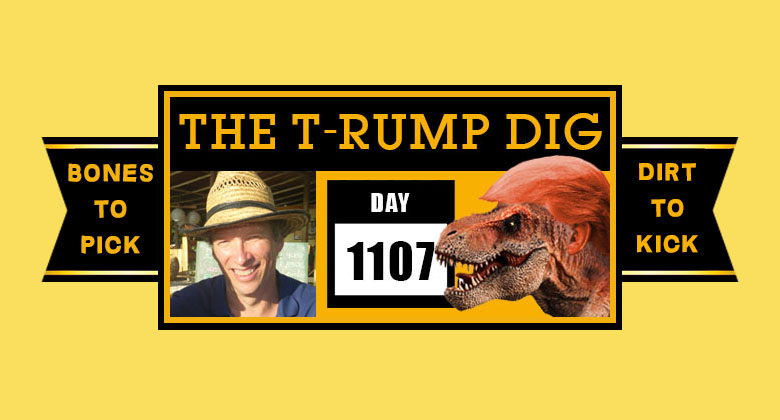 A metaphorical meteor of monumental proportions hurtled out of control toward the Milkanhoney Preservation, home to millions of unsuspecting dinosaurs. That meteor was the resounding “No” vote cast by the Lamaralexander at the end of Day Nine of the Tyrumposaurus impeachment trial in the Sin Hut.

The vote on having dino witnesses loomed. If it failed, the vote to remove the T-Rump would quickly follow. Because that’s how the Moscow Mitch trudged. At stake, a stay-at-home dino’s place on the damn food chain. No one doubted the Moscow Mitch’s place atop said chain.

The Adamschiff had done his best to persuade the Sin Hut dinos that they needed to hear from dino witnesses for this to be a fair trial. Those in attendance would say the speeches he gave were the most powerful, moving words heard since the Obamarus. The Adamschiff’s passion, his eloquence and pin-point detail provided overwhelming evidence to the Ukraine Plain shake-down orchestrated by the T-Rump.

Yet it was the Patrickphilbin and the Jaysekulow, a pair of T-Rump legal dinos consistently couching their vapid, nonsensical responses in hypocrisy, lies and innuendo, thus providing woefully inadequate cover the groveling Grandoldparty Sin Hut dinos readily glommed upon like a pack of 50-ton Diplodocuses bringing home a dung beetle for supper. A swift closure to the shameful sham of a trial looked inevitable.

The Johnbolton never had a chance. He had first-hand knowledge of the incriminating information linking the battle campaign assistance the T-Rump offered to the Zelensky for damaging dirt on the Joebiden. But the Grandoldparty dinos did not want to hear from him. They would rather stare down at the ground, mumbling to themselves than stumble into the truth. Had the Puhl-DePlugg Reservoir become the Moscovian Bluffs?

With the flip of the tail from the Lamaralexander, the vote on the presentation of evidence was now on the shakiest of ground. This may well be the last chance to right this wrong. To save truth, justice and the dinosaur dream. Oh sure, the Mittromney and the Susancollins would come through. But what about the Lisamurkowski? The Lisamurkowski. The word ricocheted off the walls of the brains of millions of dinos laying awake in their caves staring helplessly at their dripping ceilings.

This was the first impeachment trial in 15 previous occasions where no evidence, not one dino toe-nail had been presented. It would set an unthinkable dino precedent. The four dozen-or-so Grandoldparty dinos seemed ready to gamble their legacies that not having witnesses in a trial was a good thing if that meant keeping the T-Rump in power. They would live to fight another day. The question was, what would this new dino world look like?

Would it be a world where the T-Rump did as he pleased because he only had to — as the Alandershowitz had argued — tell the Dino Nation that whatever nefarious deed the T-Rump was plotting, he was just seeking to remain their leader and, after all, that was obviously in their best interest. Because he said so.

Once the dinos laying awake with their dripping ceilings managed to shake the Lisamurkowski from their minds, they only found themselves in more shock. Where was rhyme, reason and logic? How had so many Sin Hut dinos come down with an acute case of Cracked Walnuts? Dino society was cracking alright. Morals. Scruples. Ethics. These were words the hardiest of dinos had finally grasped, only to see them now on the verge of  disappearing from the dino’s limited lexicon, given this unfathomable turn of events.

Doomed. Doomed dinos they were. Was this it? Was the fat lady dino singing already? If you listened closely, it sure sounded like it.

T-Rump is not well

And the Sin Hut is stacked

To take us to hell

There are so many to blame

Will things ever be the same again?

No witness has seen us

They’re hiding them all

Our subpoenas have years to go

With more sand to pound

Liberty, we’ll all miss her so