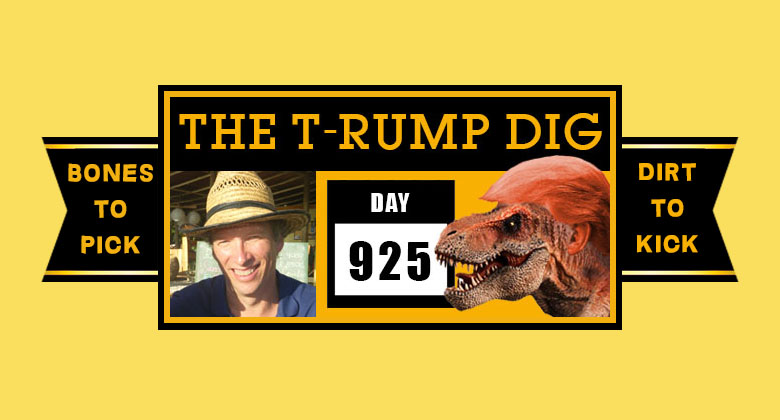 The 20 Donkeykongrus dinos slogged along, continuing their Trudge-About, a Trumpassic Period version of the walk-about. It was a soul-searching trek these dinos took religiously every month. The November battle was still 15 months away but it was never too late to commiserate with comrades about how best to defeat the Tyrumposaurus.

They made their way through Motorsitty-Klunker, a greasy-grassed Michigonian meadow where the rubber trees met the road. They traveled in two packs of ten, separated by a hundred yards and a thousand thoughts. Misery loves company but let’s not get ridiculous.

In the lead group, the Elizabethwarren raised her short arm.

“We can’t take the Oval Dwelling with small ideas and spinelessness.”

“That’s why we need to take care of ourselves,” said the Johndelaney. “It’s all about health and I’m the only dino here with experience in the business.”

“It’s not a business,” said the Berniesanders.

“Woah!” said the Johnhickenlooper. “I want everyone to just stop and think of where you would be if you woke up tomorrow morning and needed life saving surgery.”

“Thanks John,” said the Betoorourke. “You sure know how to ruin a good trudge-about. We already have the Stevebullock’s false choice. And now your freaked-out choice.”

The Johndelaney clapped him on the back.

“I agree with you, Steve, but I have to go you one better on the wish lists because I need to get to 5% like now.  We can win if we run on real solutions, not impossible promises. Things that are workable, not fairy tales.”

The Elizabethwarren again waved her arms in the air emphatically.

“Why anyone would go to the trouble of being the leader of the dino nation only to talk about all the things we can’t get done.”

The Johndelaney smiled back at her awkwardly, as if he’d delivered the punch line.

“Wow,” said the Johnhickenlooper, “I’m glad she got you, John, before I spoke, because I’m dead set in my ways and can’t comprehend change. And these are radical changes we’re talking.”

The Berniesanders threw his hands up.

“Throw your hands up,” said John.

“Oh, I can do that to,” said the Johnhickenlooper. So both dinos took turns throwing their hands up for a moment or two, as the other dinos thankfully reminded themselves the dino world wasn’t watching.

“Hey,” said the Petebuttigieg, “I’ve spent my entire adult lifetime waiting for a moment like this. Hear me out. They’re going to say we’re a bunch of crazy socialists. So, let’s just stand up for the right policy, go out there and defend it. That’s my policy.”

The dinos all paused, looking at him for a long moment.

“N-a-a-a-a-h,” they said with a collective shake of their heads.

“You need a voice from the heartland,” ventured the Amyklobuchar.

“Define heartland,” said the Timryan. “Because that sounds damn close to Youngstown.” He let his glare resonate. He turned to the others. “I hope tonight at some level I captured your imagination.”

“Ooh,” said the Mariannewilliamson, holding out her trembling hands. “Can you feel the toxicity and emotional turbulence below the surface?”

A visibly frightened Timryan backed away from her. Youngstown was replaced by Crazytown. She continued.

“What imagination? I’ll show you imagination. Where should I start? The war on wonkiness? The 40 acres and a mule?” I know, how about the dark psychic force of the collectivized hatred?

A hundred yards behind, the second pack of ten dinos weren’t faring much better.

The Billdeblasio tapped the Joebiden on the shoulder.

“Hey, I’m still waiting to hear your response when the issue came up of all those deportations.”

The Joebiden turned to face him.

“But here’s the deal. The fact is that we’re talking about things that occurred a long, long time ago. And now, all of a sudden, you know — I find it fascinating. Everybody is talking about how terrible I am on these issues.”

“Now you’re talking,” said the Coreybooker. “You’re dipping into the Koolaid and you do know the flavour.”

Koolaid was a nickname for the less swampy water slurped from the Puhl-DePlugg Reservoir. The Joebiden grasped the Coreybooker’s arm.

“The fact is that the leader — that, excuse me, the exalted one … damn, the numero uno, hold on now, I’ll get it … the future leader here — there … finally.”

“Thanks for your endorsement,” said the Coreybooker. “Giving up already, are you?”

“Joe,” said the Jayinslee. “I don’t want to hurt your feelings, now don’t take this the wrong way, but your health plan … well, I’m afraid to say … it’s … middling.

“As in middle-weight,” said the Kamalaharris. “Sorry, Jay, if you want to punch up, you’ve got to go at him harder. Allow me.” She stared down the Joebiden. “Welcome to Round Two. Let’s talk health care. Unfortunately, you’re just simply inaccurate in what you’re describing.”

It was the Tulsigabbard. Her eyes positively gleamed at the Kamalaharris.

“You blocked evidence that would’ve helped a dino on death row, you put 1500 wacky-tobaccy dinos in the Solitary Sinkhole and you kept other dinos there too long — to be used as cheap labor.”

The Kamalaharris was caught flat-footed. A wise Juliancastro looked on.

“It looks like more than one of us hasn’t learned the lessons of the past and one of us, heh-heh — that would be me — has.”

The Kamalaharris finally found her voice.

You could hear a lone swamp bubble pop in the reservoir. The dinos looked at one another. The Andrewyang finally broke the tension.

“Hey, did you know that the opposite of the T-Rump is an Asian dino who likes math?”

The Kirstengillibrand saw her chance and jumped in.

“I’ll tell you this, if you want to get something done, just tell me it’s impossible.”

“That cliff over there,” said the Coreybooker, grinning at her. “It’s impossible to jump off it.”

“Ahem,” said the Michaelbennett. “Listen up. Who doesn’t think I can draw a straight line from the Dixieslaver dinos … through the Segregators … through the Caveless Crisis … through the Solitary Sinkhole … right to the Betsydevos? Huh? C’mon. Any takers? I win. You lose.”