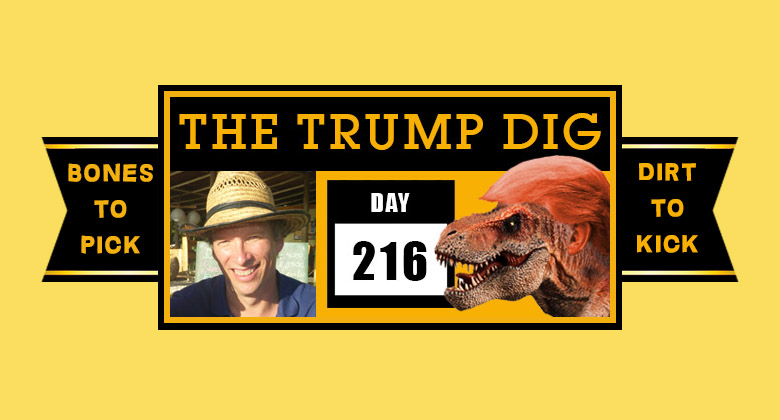 “T-Rump, you’re sure you’re going to get me off? Is that the straight-shootin’ truth?”

The Sheriffjovenator had been in trouble with the other dinosaurs for attacking more than his quota of slow-running Latinonachos.

“Sheriff Joe. Would I lie to you?”

“Well, the Mediacircustops said you lied 57 times in 77 minutes last night at the Phoenix Drop-Off.”

“You had to bring that up,” said the T-Rump, noticeably rumpled.

“I was trying to break my record of one lie per minute.”

“Do you have any ideas how many times I’ve lied since I’ve taken control around here?”

“One thousand. Say it with me.”

“One thousand,” they said in unison, the Sheriffjovenator with somewhat less conviction.

“Yes, I forgot to bring it up last night.  I’ll have to cull someone from the herd for not reminding me. But tell me, be honest now, which do you think was my best lie? No, my greatest lie.”

The Sheriffjovenator was in an awkward position. He didn’t want to pick a lie from the T-Rump’s repetoire that was less than his best for fear of upsetting him.

“Uh … when you never mentioned ‘many sides’ when referring to the Charlottesville Divide?”

“When you claimed to have invented ‘extreme vetting’?”

“Well, there were so many.”

“Um … you said the Mediacircustops does not care about the Milkanhoney Preservation. That was pretty low.”

“Yes and no,” said the T-Rump. “It was low but it wasn’t the lowest. The best lie was the totality of it. Think of it, Sheriff Joe. I can rewrite history.”

The Sheriffjovenator scratched his nether regions.

“Now why would you want to go and do that?”

“I will go down as the leader that told the most lies — the Stalinator still has a huge lead — AND I will be able to mold my legacy as I see fit. That, Sheriff Joe, is the art of the deal.”

“You mentioned legacy? Don’t you have to do something first?”

“I was just asking…”

“And I’m telling you. Your pardon IS the first step of my legacy.”

“I don’t mean to pester you with this but … are you lying again?