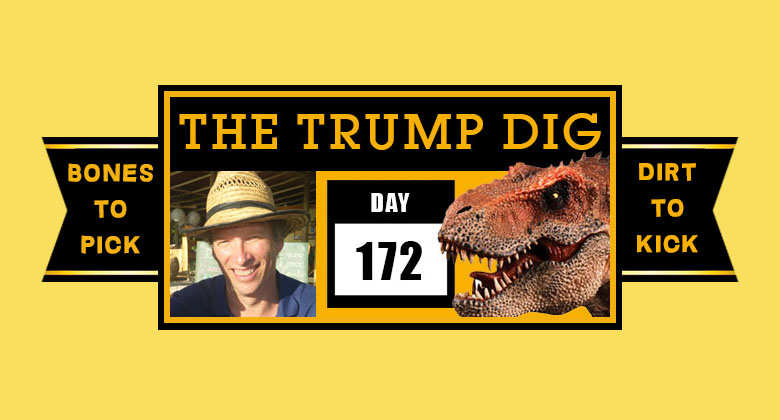 It was another big day at the ol’ bone garden. I found five new, inexorably-linked bones. It took me all day to pull them apart. The first one was a very significant find. Hard to believe, but the Tyrumposaurus had a son. I have the honor of naming him T-Rump Jr. It was GREED that confirmed their close relation. Graduated Radiometric Extra-Epoch Dating, that is. Like his father, T-Rump Jr. was a bipedal carnivore with a massive skull balanced by a long, heavy tail. His two-clawed digits were able to get into all things DNC (Dirt Not Classified).

The Kushneratops was a horned face herbivore originally from Maryland’s Middle River Double Bone Beds. He obviously covered a lot of real estate to arrive at this close, social position with the T-Rumps.

The Manaforta was a thick-nosed hadrosaurid from Nest Egg Mountain. He had a small, spiky crest in front of his eyes, mainly used in headbutting contests. The Manaforta was the first to feed their young while they were in the nest. It will be interesting to see if this nurturing communication kept them on the same page, er … nest.

The Veselnitschemus was a Kayjeebeeopsaean theropod from the well-preserved Siberian Salt Flats. To balance the gender of my report, I will refer to this attractive fossil as female. She was a lizard with swift hind legs, apparently capable of dumping dirt on the Crookadillary.

The Magnitskiactosaur was a three-ton, whistle-blowing penalcellpod imprisoned in Moscovian mud. Believe it or not — I call it dig-site destiny — but he appeared to be flipping his fifth finger at the other Kayjeebeeops.

How did all this find the light of day? My nagging hunch about the above was confirmed when I discovered the T-Rump Jr.’s SF86 bone had failed to form properly. It stuck out like a sore thumb in this Mesotheliomaean menagerie.