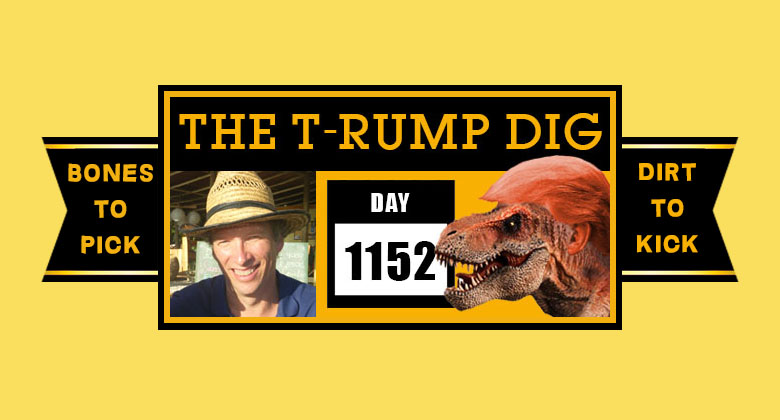 It was late at night in the Milkanhoney Preservation and many dinos were having trouble falling asleep. None more so than the Dino Nation’s chief Sawbonesaurus, the Jeromeadams. He lay awake in his nest lined with moolah-moolah leaves, not as many as the Tyrumposaurus’ appointed sycophants, mind you. He’d have to see about improving that score. But it was a nagging feeling he couldn’t escape. A feeling he used to have if and when he did something even slightly wrong. Guilt. That’s what it was. It had been so long.

He stared at the wet spot on the cave ceiling above him, wishing the dino above would at least go outside to pee. His thoughts trailed back to earlier that day and another last-minute, panic-or-bust briefing with the Mediacircustops …

The T-Rump stood at the lectern and the Jimsciutto took aim with a deadly question.

“T-Rump, do you put any blame upon yourself for being weeks behind in testing dinosaurs for the Coronavirus?”

“What is it with all these nasty questions? Very nasty. Of course I don’t put any blame on myself for what has happened. And before you recall what I said yesterday or a week ago, yes, once upon a time I said that only I can save Dino Nation. And I am not going to blame myself if I don’t. Again, only I can save us and if I don’t, it’s not my fault. How many times do I have to say it?”

The Jimsciutto did a double-take.

The Jeromeadams couldn’t take it any longer. Time for a raise. He sprang into action, tapping the T-Rump on the shoulder and sliding in front of him to the flat rock lectern. He glared at the Jimsciutto and the rest of the scrum.

“How dare you question the T-Rump. Why, he’s the only reason I’m standing here before you right now. We’re doing everything we can. Like the T-Rump once said, so famously, what you’re seeing and reading is not what’s happening. There’s no crying over coughs and sneezes. We’re dinosaurs, dammit. So, no more bickering, no more criticism or finger-pointing. I really want to crack down on the finger-pointing.”

The Jimscuitto’s face scrunched into confusion.

“You’re kidding, right? We are Mediacircustops. It’s our nature. It’s in our blood. Without us, you guys would have free reign, trampling over everything. Who is going to hold you guys accountable?”

The Jeromeadams was suddenly outside of dino doc waters.

“Uh, well. Maybe you could just focus on getting the word out on all the help we are going to unleash on the dino communities to help save them.”

And it was all downhill from there.

The Jeromeadams blinked at the ceiling. Good gawd. Was it leaking? His thoughts turned from urine to the other situation at hand. The T-Rump’s non-answers, the bravado and finally, he himself stepping in front to tell the Mediacircustops to knock it off. The guilt was piling up. Bluster being mustered. Like molten lava, bubbling to the surface, ready to erupt. Guilt could only be kept down for so long. He had to get it out. In the quiet recesses of his solitude and now quite dank cave, he got it all off his chest with bedside words and sing-song notes.

Shoves Jesus and our nation too

Loves divorces and his moolah too

And it’s the wrong day to live or reside here

And he’s a bad guy, a failed amateur

Now all the swamp liars talkin’ through his rally

They have trouble readin’ a flash card

And all the good news is still stuck in the shadows

And the bad news has us comin’ apart

I wanna slide on over to Holland

I wanna find out their testin’ style

How they can make somethin’ from nothin’

While T-Rump’s so damn juvenile