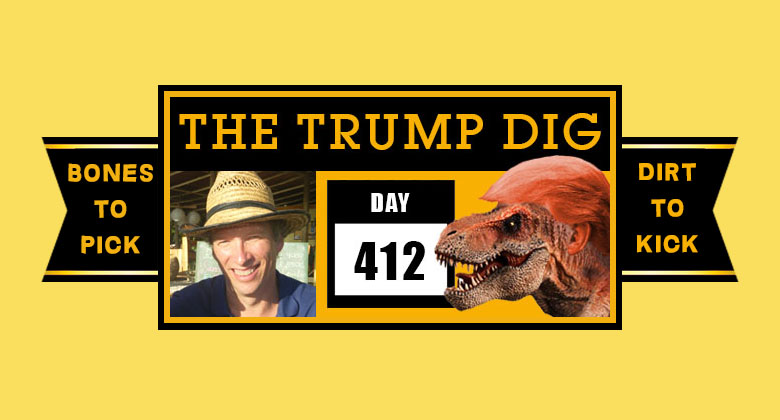 The Samnunbergbrain’s eyes widened and a loud burp escaped, echoing across the Puhl-DePlugg Reservoir. He squatted back down at the dirty end of the reservoir and helped himself to another double sludge. He was trying to drown the embarrassment of the previous day when he’d spent six hours with various Mediacircustops. He told them he’d rather spend 18 months in the Solitary Sinkhole than share his secrets with the Muellersavus about a dozen dinos on the T-Rump’s team.

The Samnunbergbrain was doing it all to protect the Rogerstone, a herb-munching Conspiruhseetheery dino who helped him reach almost-respectable heights as a T-Rump hanger-on. He hoped the Rogerstone would arrive soon. The Samnunbergbrain was close to sharing his woes with either of the two faces that appeared to be reflecting back at him in the swamp water. Did he have a twin brother?

“Roger! It’s so good to see you.” He jumped to his feet and hugged the Rogerstone as one might their surrogate father. “Five minutes after I met you, I knew you were my mentor. You’re my idol. My hero. My everything.”

The two dinos hunkered down and within minutes the double sludges were flowing. The Rogerstone swished the swamp water between his cheeks and winced at the alkali level.

“You know, you really didn’t have to do that.”

“Go to every Mediacircustops in the reservoir and defend me by making a complete fool of yourself.”

“I can look after myself,” said the Rogerstone, flexing a row of deltoids. “I practice Tai-Chi-Cheeto-Frito-Lay and therapeutic breathing to maintain my preternatural look.”

“Beyond what is normal or natural. You might say phenomenal.”

“I can’t BELIEVE she’s doing this!”

The two dinos looked up and turned to the sound of a dino further down the reservoir’s bank. The dino splashed his tail in the swamp in frustration.

“Hey,” said the Samnunbergbrain. “Easy there. You’re spoiling our double sludges. The water has to settle just right, you know.”

“Is that you, Michael?” asked the Rogerstone. “Come on over and join us. Misery loves a down-and-out legal dino.”

The Michaelcohen sidled over and plopped down beside them.

“Have I told you guys I’m still waiting for the T-Rump to pay me back the 130-thousand moolah-moolah I had to pay the Stormydaniels?”

“Yeah,” said the Rogerstone. “Yesterday and the day before that.”

“Stormydaniels?” said the Samnunbergbrain. He shot a look at the Michaelcohen. “You’re not trying to drag Roger into this, are you?”

“Woah, settle down, tiger,” said the Rogerstone, putting a hand on the Samnunbergbrain’s shoulder. “That was the Ninahartley I had a drink with.”

It was the Garycohn, Sub Family of the Economonyx dino. He squatted down beside the three dinos and splashed up a drink.

“Hey, Gary,” asked the Michaelcohen, “could you ask the T-Rump when I’ll get my money?”

“Sorry, I don’t work for that two-bit tyrant any more. I told him not to do it. But, oh no. He thinks he knows everything. He trots out the Steelrazorback and the Alluminnium dinos …”

“That’s right. So I quit. Now we can only sit and watch as he turns the Milkandhoney Preservation into … into …”

The four dinos gazed down at the reservoir before them.

“Swamp water,” muttered the Samnunbergbrain. His anger flurried anew. “Roger! They may come for you!”

“Sam. Relax. Have another double sludge.” They slurped. The RogerStone snickered.

“What’s so funny?” asked the Michaelcohen.

“The T-Rump’s dirted us all down the road, except for you. You still work for him.”

“I know where this is going. Look, the T-Rump and Stormydaniels? I paid the 130-thousand because nothing happened!”

The dinos laughed uproariously, falling about in the swamp. The Rogerstone finally surfaced. He wiped the dirty water from his eyes.

“Say it again, Michael. It gets funnier every time. I’m simply amazed you can say it with a straight face.”

The straightest of faces strode up to the reservoir’s bank. It was the Muellersavus.

“In case you haven’t heard, gentlemen, the Stormydaniels has just sued the T-Rump.”

The dinos fell back into the water, laughing hysterically. All except for the Michaelcohen.

“Come with me, Cohen,” said the Muellersavus. “I’m not in a Subpoenasaurus mood.”

The Michaelcohen pointed meekly at the Garycohn, still rolling about on the sand, holding his belly in fits of laughter.

The Muellersavus turned away and the Michaelcohen reluctantly followed in behind him, saying a brief legal dino prayer as they plodded away from the reservoir.