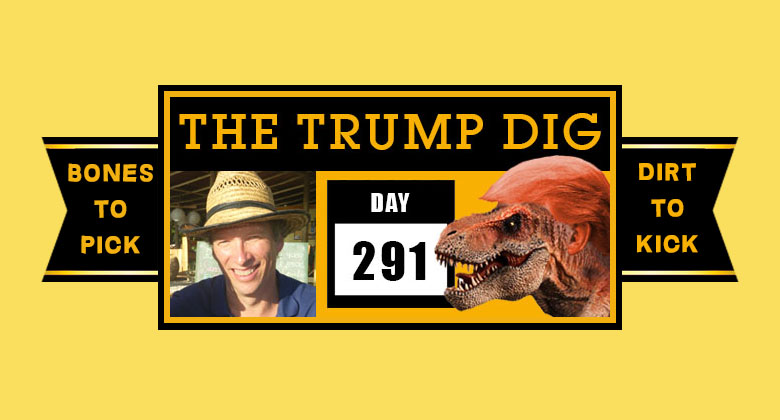 The Muellersavus bared his second row of teeth, causing the Manaforta and the Rickyprisongates to cower in the corners of their respective caves. A 12-foot travel ban had been slapped on the two Tyrumposaurian advisors following their charges of conspiracy and squandering moolah-moolah leaves on very undinosaur-like home renovations in the Milkanhoney Preservation. The moolah-moolah had traveled through the Cypress Spygrass, possibly tooth-marked for the T-Rump from the Putinodon.

With a swish of his wide-ranging tail, the Muellersavus stomped off. He was a dinosaur driven by the code of the Continental Drift. That is, keeping dinosaurs off it. Better the straight and narrow. One by one, he would track down other T-Rump advisors, hangers-on and Coffeeboychucks — any and all cagey Kayjeebeeops — in his investigation that had rocked the Trumpassic world.

‘Paulie’ was the alias Rickyprisongates had been coached to call the Manaforta.

‘Yeah. Finally. I hate that dinosaur.”

“Of course we are. As long as we stick to our story.”

“Uh, we’re the center of the Odessa Messa?”

“No. One more time, Ricky. We were working for the Center — capital ‘C’ — which distances us from the Odessa Messa. Remember?”

“Busting out of this dump real soon. That’s what we’re doing.”

“You’re not gonna turn on the T-Rump. Are you, Paulie? Where we gonna hide?”

“Woah. We’re not taking the T-Rump down. Not yet anyway. If this works, we won’t have to. I’m going to offer them the Brooklyn Brown Stones …”

“No, my home! As well as Calm Leech Gardens. And the Belair Forclozhair too.”

“Sure, Paulie. We’ll give them Marvin Gardens too.”

“How come I don’t have any nice homes?”

“Because you’re my protégé.”

They stewed in their own selective, isolated juices. The Rickyprisongates finally spoke.

“You did fine, Ricky. 55 different hiding places in 13 different areas. You spread the moolah-moolah around just fine.”

“All I wanted was a little place in Manhattinhand. That’s all, Paulie. A place to call home.”

“I may need your little home.”

“No, Paulie. I’ll rat that tyrant T-Rump out first! I will.”

“Then what, Ricky? Do you want to be another Papadopoulus? Another Coffeeboychuck who got too close to the covfefe?”

The Rickyprisongates heaved a long sigh and sat back on his haunches.

“Let me do the thinking. Just deny, deny, deny. Can you do that for me, Ricky?”