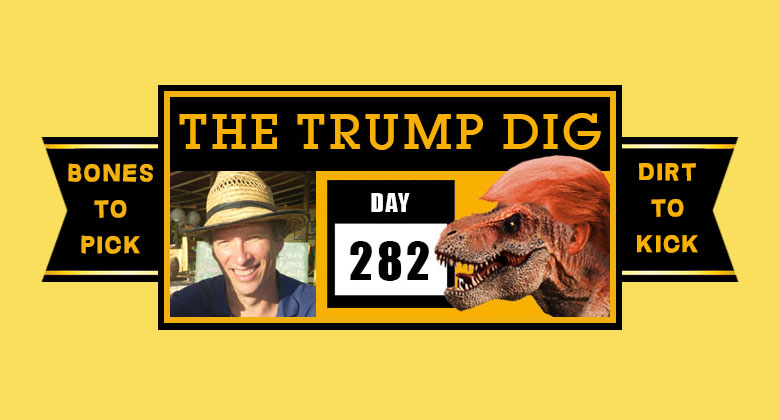 The Tyrumposaurus and the Marinegunkelly huddled over a chokecherry bush, choking down the berries three at a time. They were going over the wording for the T-Rump’s next message for his growing fleet of Trollertweeties.

“You just used that for the Tennesseecorker.”

“Damn. It’s tough leading this Milkanhoney Preservation. I got it! Wacky an totally unhinged.”

They filled in the rest of the message. It was short because the Trollertweeties needed most of their energy for flying. Twenty minutes later, the horde of Trollertweeties lifted off and could soon be heard throughout the countryside with the following news …

“Squawk! Wacky and totally unhinged Tomsteyersaurus, who has been fighting me and my Make the Milkanhoney Preservation Great Again agenda from beginning, never wins elections! Squawk!”

The Tomsteyersaurus of course, was the Enviro-philanthropian dinosaur that had been whispering in every dino’s ear that the T-Rump should be tossed out on his tail.

The raucous Trollertweety onslaught had near immediate results, for a large shadow soon appeared at the T-Rump’s oval dwelling. The Trumpassic leader looked up from his private crystal clear vanity pond.

“I just wanted to stop by and say you’re right about one thing.”

“Correction, I’m right about everything.”

“But you see, I’ve never won an election because I’ve never been in one. As a dinosaur who is, ahem … comfortably-well-off, I merely support others.”

“Quit dodging the issue. An election is an election.”

“Okay then,” said the Tomsteyersaurus in a level, measured tone. “If that’s the way it’s got to be, let’s go. You and me.”

“No,” said the T-Rump, his eyes glimmering wide with glee. “Let’s have five.”

“Because I like elections. Did I tell you about my win over the Crookadillary? It never gets old. Where were we? Elections, right. They’re just popularity contests. We’ll have five of them, just to show you I’m the greatest. I’ll make up the category for each and then we’ll leave it to the dinosaurs.”

A few hours later the stage was set. Dinosaurs throughout the land had gathered at the edge of the Electoral Forest, a densely wooded region with towering Dutch Elms. The 5 categories went by word-of-mouth down each row to the far end, returning with the tabulations which were then clawed into the closest elm and tabulated for the Huckabeecyclops.

She stepped to the edge of the Bullee-Tar Pit to address the audience with the results. Eyeing the crowd, she paused to focus her wandering eye.

“The first category is for the Smartest Dinosaur. The dinosaurs choose … the Tomsteyersaurus.” Her heart sank. She peeked at the T-Rump and shuddered. He looked like he might bite off her head. Instead he stepped forward.

“Apparently not,” said the Tomsteyersaurus.

The crowd rumbled, as dinosaurs tend to when standing for long periods. The T-Rump motioned for the Huckabeecyclops to continue.

“Ahem, for the dinosaur who is the Best Fact Checker.” She blinked, staggered and righted herself. “It’s the Tomsteyersaurus.” She looked visibly wounded.

“Wait a minute,” said the T-Rump. “I waited for the details. Once.” He grimaced. “C’mon Huckabeecyclops, make me a winner. Do something.”

She timidly stepped before the crowd. Her eyeball swirled crazily, bringing nausea to dinos in the front row. Her vision finally cleared.

“The third category … for the dinosaur who received the Most Standing Ovations from dinosaurs who weren’t required to stand … oh, my dinosaur patootie … it’s the Tomsteyersaurus.”

The Tomsteyersaurus waved to the cheering crowd while the Huckabeecyclops wiped streaming tears from her face. The T-Rump helped her back to the edge of the Bullee-Tar Pit.

“Pull it together,” he hissed. “I’m not going to lose this. Winner, Huckabee. Think winner.”

The poor Huckabeecyclops stepped back to the Bullee-Tar Pit, her eyes wielded shut in some Piscopilian dino prayer. The T-Rump was tempted to push her off the cliff. He shook his head. Too many witnesses.

“The fourth category, everyone. Please, calm down. Let’s not get crazy here. Okay, the dinosaur you would most anxiously wait for them to announce their every waking decision … No-no-no-no! … The Tomsteyersaurus.”

The gritting of the T-Rump’s molars could be heard a mile away. He grabbed the Huckabeecyclops by the arm.

“Look, this is a disaster. I don’t even want to hear the last category.” He paused. “Just look and see if I won.”

The Huckabeecyclops looked at the final category result. She was emotionally drained. Her lone eyeball looked ready to fall out.

“I won?” That winning feeling had finally returned. “I won!” he shouted from atop the Bullee-Tar Pit. “Quick, fire up the Trollertweeties. The dinosaurs need to be told.”

“Hush, Huckabee, you know the drill. Whisper in their ear the message and they’ll do the rest.”

A minute later, the word-of-mouth, Trollertweety-to-Trollertweety launch prepartion was complete. They swooped off the Bullee-Tar Pit and carried their message throughout the land …

“Squawk! The dinosaur who is the most wacky and totally unhinged? It’s the T-Rump! Squawk!”

The crestfallen T-Rump fell to his knobby knees. The Huckabeecyclops had fled the scene to hide behind a Dutch Elm in the Electoral Forest, hoping the Spicerophus wouldn’t see her. The Tomseyersaurus smiled and sighed at his sweet victory. He noticed another dinosaur had joined them.

The weary T-Rump gazed up into the eyes of …

The arch-enemy of the T-Rump had that “I’ve got something to say but it’ll have to wait until Monday” look in his eyes.