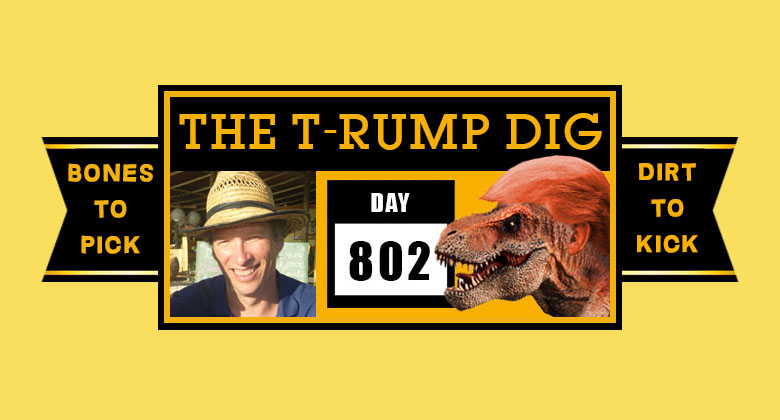 A heavy rain swelled the Puhl-DePlugg Reservoir. Inside his cave, the smooth-skinned Jaketapper, a veteran, truth-seeking Mediacircustops, hunkered down with his guest, the Mickmulvaney. The T-Rump’s acting chief of staff was grinning as if his life depended on it. The Jaketapper made a mental note. Never trust a happy dino in the rain.

“Welcome, Mick. Any word on when you’ll be dropping the “acting” from your job title?”

“Look, before the T-Rump won, I called him a terrible dino, his actions on the Great Tex-Mex Divide absurd, almost childish and how he wouldn’t succeed in an ordinary universe. Now I’ve joined the Tedcruz and the Linseygraham as another successful T-Rump Assimilation.”

“Bully for you. Mick, this week the Adamschiff, chair dino with the Kongrus Kave Intelligence Committee ran down a list of some pretty damning incidents: the T-Rump Dump meeting with a Russian legal dino promising dirt on the Crookadillary, the Flynnhasbeen lying about his conversations with the Russodino ambassador, the Manaforta sharing battle campaign information. I couldn’t do his comments justice of course, so I invited him to step in and breathe life into this dark cave. Adam?”

On cue, the Adamschiff stepped out of the shadows. He glared at the Mickmulvaney.

“Thanks, Adam,” said the Jaketapper. “You can go now. Oh, and, before I forget. I just wanted to note your strength, fortitude and incredible patience.”

“No, for not giving the Devilnunesmemo a good tail-whip upside the head. He was sitting right beside you.”

The Adamschiff exited the cave and the Jaketapper turned to the Mickmulvaney.

“From what we know, the Muellersavus concluded there was not sufficient evidence for any criminal charges having to do with conspiracy or collusion with the Russodinos. But what do you think about his larger point that the actions were unethical?”

“Look, Adam and I go back a long way when we were both in the Kongrus Kave. But now, since the T-Rump called him a pencil-neck … I mean, he’s called dinos worse.”

“I’m talking about ethics on the Russodino matters.”

“Oh. Well, everything Adam said there was available to the Muellersavus.”

“Look, the Muellersavus had much more information but he found no collusion and no obstruction.”

“You may be the chief of staff, but you’re not going to sit here and lie to me. The Muellersavus said the T-Rump was not exonerated on obstruction.”

“Oh, sorry. I was confusing the 380-footprint Muellersavus Report with the 4-footprint, all-encompassing Williambarr summary.”

“R-i-i-i-i-g-h-t. Not a crime but what about the ethics or morality of those incidents?”

“The, uh … T-Rump said I needed to be angrier, to stand up to you Mediacircustops. Improve my image. I guess it’s not working, is it?”

“Afraid not. But you do want to stay acting chief of staff.”

“Thank you. Where were we?”

“Ethics and morality. Or lack thereof.”

“Jake, the issue here is not whether it’s ethical.”

“No. Look, the Adamschiff runs the Kongrus Kave Intelligence Committee. He gets to see a lot of stuff that the rest of us don’t. He has a huge responsibility not to be partisan. He has to look at the other dinos and say, look, I’ve seen a bunch of stuff, you haven’t seen it because you don’t get to, I do. Trust me, it says X, Y, Z.  Adam has lost the ability to do that.”

“Since when did ethics become partisan?”

“Since the Muellersavus gave us the all clear. You heard all the Grandoldparty dinos call upon Adam’s resignation this week. Look, there are some Democrats who simply can’t get over the fact that the T-Rump is the leader. I get that. And the Adamschiff is one of them. Enough is enough. Time to move on to health — still need a plan there.”

“Mick, All I’m saying here is that you’re setting the bar on criminal charges or evidence of conspiracy and let’s say I agree with you. But Adam’s talking about ethics and morality and you’re saying that’s not his job. Fair enough. But, forget the Adamschiff for a second. What about the larger point of ethics and morality?”

“Jake you’re putting far too much emphasis on this. You’ve seen the great work from the Devilnunesmemo for us, haven’t you. No ethics there, trust me.”

“I can’t believe I’m hearing this. What happened to the ordinary universe you mentioned?”

“Long gone. At least until after the next battle campaign. Ethics are not the job of the Kongrus Kave Intelligence Committee.”

“Is it still their job to be intelligent?”

“They’re supposed to review the functioning of government. The dinos of the Milkanhoney Preservation will make their own decisions on whether or not their dino reps need ethics and morals. We can’t have members of the Kongrus Kave substituting their own judgement for the dinos they represent.”

“Yet it’s okay for the dino attorney general, the Williambarr to substitute his own judgement when the Muellersavus didn’t offer one on the obstruction of justice?”

“The Williambarr did a fine job of soaking in the two years of Muellersavus’ work in two days. Look, Jake. Perhaps I can sum things up here.”

“When I first met the Garycohn I wanted to get noticed by the T-Rump by cutting dinos’ health and welfare. So I walked up to Gary and said, Hi, I’m a right-wing nutjob.”

“Thank you, acting chief of staff.”