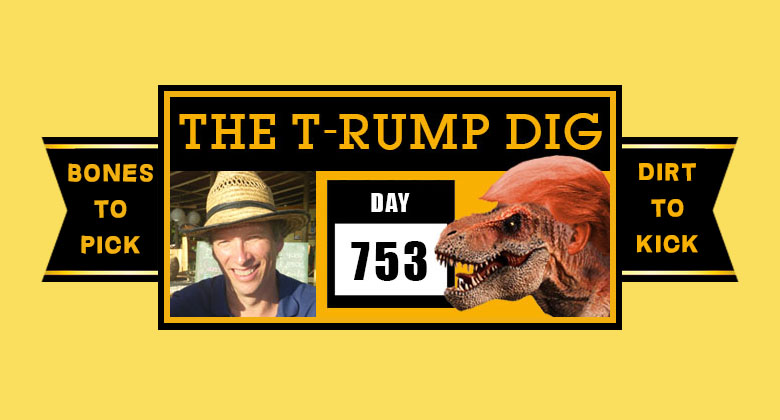 There came a royal knock and the Oval Dwelling occupants quickly rose from their collective squats. The Crown Dino of the Saudisaurae, the Muhammedbensalman, or MBS as the Mediacircustops called him, was visiting the Puhl-DePlugg Reservoir on very important business. He entered the cave, his tail rolling regally.

“Welcome, your excellency,” said the T-Rump. “Please, take my seat.”

The Crown Dino sniffed at it before squatting with a frown.

“Hmph. Next time I will need a bigger rock.”

“Of course you will. Call me the Little Rock. It’s all the Crookadillary’s fault.”

“But this isn’t her fault. No, as I look around your den of thieves I see you all have one thing in common.”

His tail lashed out and around the room. Every dinosaur ducked except for the T-Rump, still grinning, He’d never had to duck before. He took the blow to the back of the head.

He rubbed his noggin gingerly. MBS tail from left field. Duly noted. His eyes watered but he didn’t cry. He was a big dino now.

The Hogangidley raised his short arm.

“Excuse me, your excellency. You mentioned idiots. Does that include me? I really don’t know anything. That’s right. Nobody tells me anything, except for me to just say, “I’m not sure, uh … we’re not involved and, uh … I’m not aware. There, I remembered all three. Whew.”

The MBS eyed the T-Rump.

“This is the best Oval Dwelling mouthpiece you have?”

“Well, no actually. The Huckabeecyclops and the Kellyanneconvixway both called in sick today. They know what you do to well-meaning Mediacircustops.”

“Of course not. They didn’t want to take a chance.”

“Oh. Well then, what is this I’m hearing about blackmail? And extortion? What kind of amateur hour are you running here?” The MBS glare bore down on the T-Rump.

“It’s a disaster. That’s what it is. I squat, waiting in the Oval Dwelling and nothing happens. Nothing! I have it on good authority from the Foxsquawkbox dinos that it’s all the Donkeykongrus’ fault. The Seanhannity and the Rushlimbaugh complain about those radical, far-left, liberal, socialists all day long. I know. I watch them. Every single mistake — the Donkeykongrus.”

“No, T-Rump. You are the leader. Your mistakes are squatting in front of me.”

“Whatever you say, MBS.”

The Crown Dino turned to the Davidpecker.

“I thought I told you to take care of the Jeffbezos.”

“You did, your excellency. We had him right where we wanted him. We’ve done this dozens of times. Never a slip. We told him he’d have to say our intentions were not politically motivated or we’d reveal those racy footprints in the sand of him and the Laurensanchez.”

“MBS, this has never happened before. I promise you. Call it the curse of capitalism — a dino with too many moolah-moolah leaves. That’s it. We, uh … forgot he’s the richest dino in these parts.”

“No, you shut up!” said the MBS. His tail looped around again. The T-Rump ducked this time but forgot the MBS was making a second swipe. Whomp! Once more to the back of the head.

The T-Rump’s lip zipped. He knew his place.

“Something else, MBS,” the Davidpecker continued. “That damn moral fibre. You’ll have to excuse us. We thought it no longer existed around here but evidently the Jeffbezos still has plenty. Who knew?”

“There is NO excuse for this! Give me one reason why I do not go Khashoggi on you this very minute!”

“Uh, because we’re not in the Middle Eastlands … nor one of your Saudisaurae By-The-Seas?”

“Okay, we will forget about the death penalty for now. Where is your legal dino on this matter?”

The Davidpecker nodded to his representative who stepped forward.

“The Elkanabramowitz, your excellency. I want you to know I appeared before the Mediacircustops today.”

“What did you tell them?”

“I told them it was a simple Pecker negotiation.”

The MBS eyed him warily.

“Do you know what we do with pecker jokers in the Middle Eastlands?”

The Davidpecker slapped himself in the head, not going unnoticed by MBS.

“You should hit yourself. Harder.”

“No. I just remembered. I had immunity! I was in the clear. Now my sleazy footprints in the sand business is going to go belly-up.”

“Not just yet,” said the MBS. “Not until the authorities go through all your dino catch-and-kill stories.”

“That’s the problem. Not enough killing.”

“Your excellency,” begged the Davidpecker. “Let us get back on groveling terms.” He quickly dropped to his knees, nodding to the T-Rump, who joined him on the ground.

The Davidpecker looked up at the MBS.

Perhaps I can do another flashy 97 footprints in the sand for you? ”

“No, I cannot be associated with you right now. You have a big mouth and you, Elkanabramowitz, are from the Rudygiuliani mold. Ahem, not a good look.”

The Crown Dino rose to leave.

“T-Rump, when the Davidpecker was granted immunity, he went from being your close friend to a sworn enemy. But you both had the Jeffbezos as an enemy. We now see however, your enemy’s enemy can never be your friend. Still, though you are but a tiny tyrant, a con among cons, keep your Sanctionsaurus away from me and one day, maybe soon, you will feel the press of sweet flesh in a high-five with the Putinodon and me.”

“Yes!” the T-Rump hissed into the dirt.