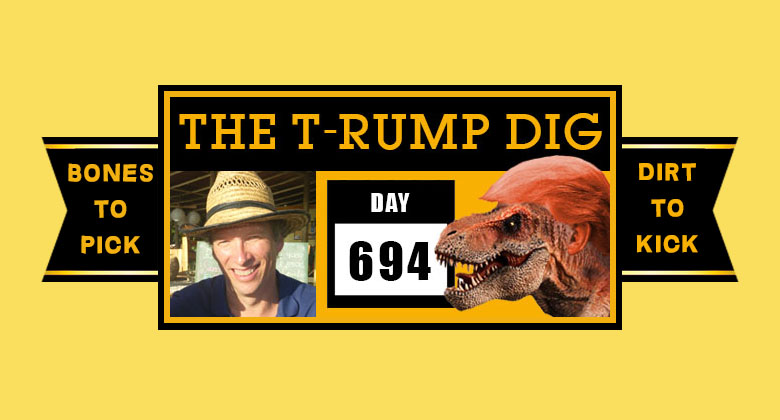 “You said it would go away. That’s what you said.”

The T-Rump frowned at the Ronnyjackson, practically blaming him. The T-Rump’s former dino doc put on a brave face. He hadn’t said that at all. He sighed and pawed at his face. The T-Rump’s lies gave him a freaking migraine. He shouldn’t even be here. But the T-Rump had sent for him in the middle of the night, because the cover of night was the best place to keep secrets. And lies.

“I’m afraid so. It’s the Smockinggun.”

“Dammit! No! There’s no such thing. Ronny, tell me this is fake, fake, fake.”

But the Ronnyjackson couldn’t. Every dino with half a walnut-brain knew that the Smockinggun was a large, slimy, orange swamp slug. This one had latched onto the T-Rump’s scalp shortly after birth but had only recently been discovered. All this time it had been hiding under a shock of the T-Rump’s orange hair.

“As I’ve said before, T-Rump. What you and the Smockinggun have here is symbiosis.”

“Symbiosis. More specifically, it’s a parasitic relationship with a twist.

“It’s the slug who’s the host and you’re the parasite.

“I hate to be the one to break it to you, but as your doctor, I must. T-Rump, you have no conscience. That’s where the Smockinggun comes in. It sees and feels all your lies and quite frankly, after 6500 of them, it’s basically putting the meat hooks to you.”

“So what you’re saying is, I lie and the Smockinggun sucks. Wait a minute. You mean I’m doing this to myself?”

“Symbiotically speaking. I know you like to lie but your lies are giving the Smockinggun more life. More Smockingguns. You know what they say about too much of a good thing.”

“But lying used to be so much fun. I have to lie. I HAVE to.

He slapped his head with his hand. A Smockinggun sucked sharply in response.

“No. Never. Where would I be then? Just another dino schmuck shedding my taxes returnus skin each spring. Not me. What about the Michaelcohen, the Manaforta and the Rickyprisongates? They all lied. Where are their Smockingguns?”

“Found. Then they up all and left. You know what they say about prison food.”

“Ronny, you won’t tell anyone about my Smockinggun, will you?”

“Which one? Let’s be honest. You are a Smockinggun. I can offer a few herbs and a bone spur rub, but it’s only a matter of time before the Muellersavus pays you a visit.”

“That you’ve had too many slugs to the head.”

“Hmph. I was going to ask you to be my Chief of Staff.”

“Thanks for thinking of me but … no way. Excuse me. I’ve gotta go. Your lies are contagious.”

The Ronnyjackson departed. The T-Rump shrugged, then cocked his head.

“Kellyanne! The job’s yours!”

“What about your handsome husband? I forgive him. Really. I do. … Ouch!”