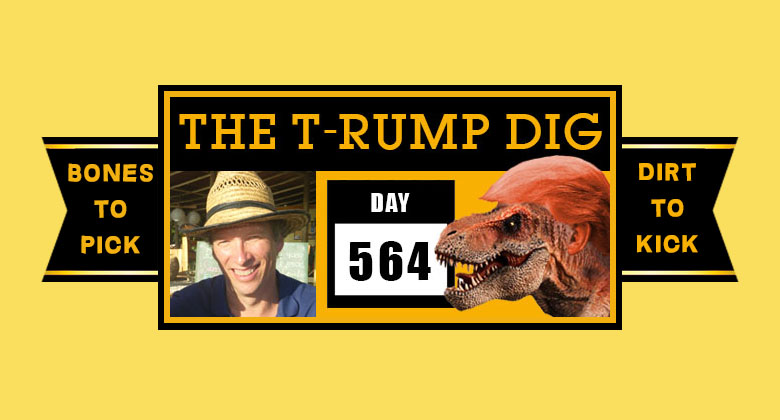 The Tyrumposaurus fumbled in the dim light of his night chamber. A grope here. A grope there. He grunted in dismay. No luck. He knew he’d left it here somewhere.

“Is this what you’re looking for?”

“A-a-a-a-g-h!” the T-Rump recoiled in fright. “The Stevenseagalus? What are you doing here?”

The visitor handed him a half-eaten Cheezbuggabugga. The T-Rump munched away on the marsupial morsel, continuing his conversation with the Stevenseagalus.

“Good to see you, Steven. I know why you’re here.”

“Sure. I get to rub shoulders with you, you tell me how great I am and then you give me a dinosaur you’d like to pardon so the Manaforta believes he has a gasp of hope. So, who’s the lucky dino?”

“Uh, no. I came to tell you that the Putinodon has made me a Diplodino. That is, an ambassador for the Milkanhoney Preservation and Moscovian Bluffs on dino rights issues.”

“After all the dinos you beat to a pulp? They had to put some of those dinosaurs down.”

“That’s why the Putinodon gave me the job. But between you and me, I’m a Buddhist dino now.”

“Oh, yeah? I just looked at a Catholic footprint in the sand six months ago.”

“You’re going to beat the crap out of the Sessionsopossum for me.”

“That’s your problem. When you lie like me, you never have to remember.”

“Which brings me to why I’m here.”

“Oh, you’ll never catch me, Steven. I’m 4,286 lies ahead of you. The Mediacircustops says I’ve actually increased my pace lately. What can I say? I’m the greatest.”

“Bully for you. … Say, when you return to the Moscovian Bluffs, would you mind keeping an eye on the Randpaul? You know how he gets into trouble when he starts talking about the grass being greener on the other …”

The Stevenseagalus looked around the room and back to the T-Rump.

“This whole dino rights ambassador gig is a ruse.”

“That’s what I said. I’ve seen you throw dinos off cliffs.”

“A spy? You mean like the Christophersteele? Have you left any footprints in the sand?”

The Stevenseagalus nodded solemnly. The T-Rump was worried.

“Aikido is a way of unifying life energy, the way of harmonious spirit. Now then, when you peed, was it harmonious?”

“I am not saying another word.”

“Okay.” The Stevenseagalus looked at him seriously. “Would you like to come hum with me?”

“Maybe another time. … So, um, what side are you spying for?”

“Why, the Milkanhoney Preservation of course.”

“I don’t know about that. Right now I’m having a lot of problems with spies. I hate the Langleyops. They’re all against me. … But, a dino celebrity spy on the other hand …”

“I could be a double agent.”

“I’m not paying you double. Everybody here works for free.”

“Okay, okay.” The Stevenseagalus lapsed into deep meditation. It was a reflexive condition, one that was quickly interrupted by the T-Rump.

“That’s it. I don’t want you to be a spy. If anybody thinks you’re a Russodino spy, that will obviously delegitimize my victory. Major talking point.”

“T-Rump, it was almost two years ago.”

“Oh, and I suppose you’re going to add that to your footprints in the sand.”

“I’m sorry I came. I saw this as an opportunity to serve my dino brothers and sisters. I really did.”

The T-Rump put his claws to his chin.

“Are you still doing those therapeutic oil products and energy drinks? You know, at the cleaner end of the pool?”

“Sure, did you want to see my six-pack?”

“Keep your belly to the ground, big boy. The Putinodon may get jealous. … Why don’t you go see the Tyvankanatrix. She can slap her name on your stuff and we’ll be rolling in moolah-moolah leaves. No offense, Steven. Goodbye.”

The T-Rump waved him off.

The Stevenseagalus squeezed his fists and briefly considered taking out the leader of the free-running dino world, one cracked vertebrae at a time. He took a deep breath however … and focused on a peaceful hillside in the Tibetlands. He hummed a tribute to an endangered daisy and pranced in slow motion out the doorway.

The T-Rump’s stomach gurgled. He began looking anew for one more Cheezbuggabugga. There had to be one here somewhere.