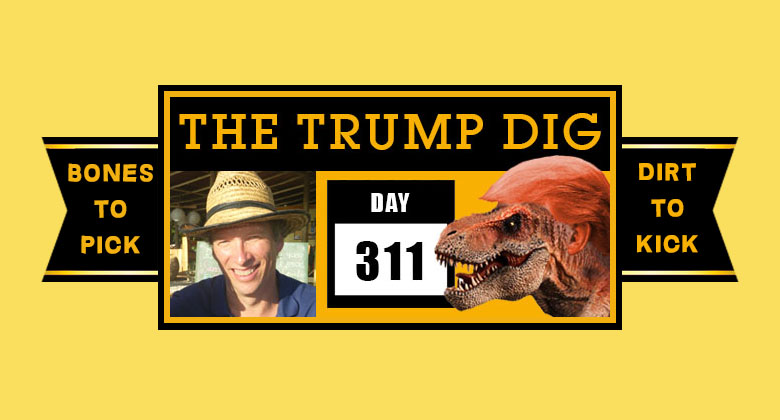 Dozens of Mediacircustops coughed, wheezed and squeezed in tighter to get within earshot of the flat rock lectern at Little Stomper Grounds, the dinosaur day care centre beside Watershed Falls. There had been rumblings the Tyrumposaurus would be stumping for the Judgeroymoore, the controversial representative for the Bamahama dinosaurs of Crimson Creek.

A young teenage Candystripertype ushered one of the dino tots to the side, an action not unnoticed by the T-Rump or the Judgeroymoore as the Trumpassic kingpin stood at the flat rock, basking in the sunlight.

“There’s a pretty one,” said the T-Rump. “She reminds me of my daughter. What’s your name, dear?”

The Judgeroymoore nodded with a chuckle. The T-Rump returned to the crowd.

“I think I saw the Tennesseecorker playing in the corner, chasing his tail. But the real reason I’m here today is to promote my good friend, the Judgeroymoore in the great unwashed region of Crimson Creek. Now there have been several accusations against him of chasing young Candystripertypes. I waited six days to say this because I wanted the Fake News to pay extra close attention to me. The Judgeroymoore has disputed all the allegations against him. Every last one of them. He totally denies it. He says it didn’t happen. And I believe him because you have to listen to him also.”

“But part of your leadership group,” piped up a Mediacircustops, “the Mitchgetbacktowork, he said the Judgeroymoore is guilty.”

“But T-Rump,” said another Mediacircustops, “so you’re saying the 16 female dinosaurs who accused you of sexual abuse and the 9 who accused the Judgeroymoore … all 25 of them are lying?”

“I believe they call that a coincidence,” said the T-Rump. “Don’t they, Judge? … Judge?”

But the Judgeroymoore was no longer at the T-Rump’s side. He had moved away from the flat rock and could be seen conversing with the young Candystripertype the T-Rump had spoken with earlier. All eyes watched as the Judgeroymoore pointed toward a shaded grove beside the falls before slowly leading her away. The T-Rump smiled and waved after them.

“Looks like the Judge is leaving me here to do the dirty work,” the T-Rump said with a smirk. “No, we do not want the Weak Knee Dougjonesy in Crimson Creek. He’s weak on protecting women and children, weak on border patrol and weak on our defense-by-devouring initiative.”

“Excuse me,” came a female voice from the audience.

“I beg your pardon? No, I’m here to pick up my daughter. She’s a young Candystripertype. Have you seen her?”

“Is her name Suzie?”

“That was just a lucky guess. I don’t know her from Suzie, I mean Eve.”

“Hey,” shouted the first Mediacircustops, “we all just watched the Judgeroymoore walk out with her not 40 seconds ago.”

“Oh, sure,” said the T-Rump. “Forty seconds ago. Why bring it up now? Because I’m speaking? Let’s just wait for them to get back and hear what the Judge has to say. I’m sure he’ll say nothing happened and we’ll just have to believe him because that’s all that matters.”

The T-Rump turned back to Suzie’s mother.

“You’re sure we haven’t met before?”