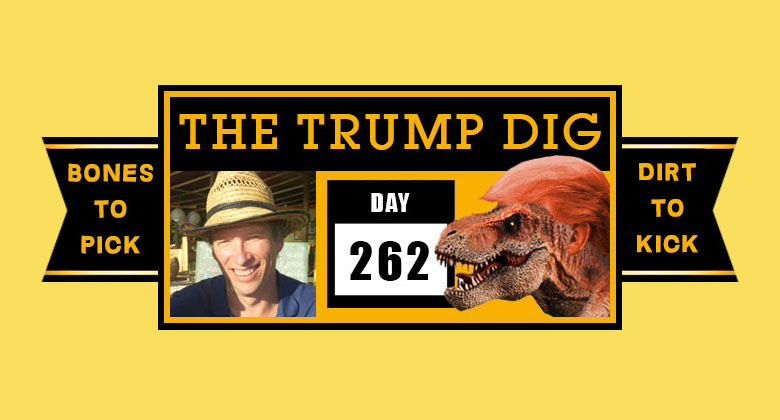 The Sessionsopus, the Mitchgetbacktowork and the Saveyourenergyrex all sat on their haunches before the Huckabeecyclops. She was overseeing their latest mandatory therapy session in the Puhl-DePlugg Reservoir. The Huckabeecyclops cast her eye to the cloudy sky. The doctor was in.

“We are gathered here today in what may appear as the deep, dark depths of depression, but I assure you that things are not as bad as they seem. Sessionsopus? Why don’t you start things off for us.”

“Well, okay. I’m feeling better these days. A good day is when I don’t see the T-Rump. You know the story, he expected me to slay the Putinodon and the Crookadillary in a single day. When I didn’t, he sent out his fleet of Trollertweeties calling me ‘beleaguered’ and ‘very weak.’ I’m not beset by difficulties. He’s the difficulty. There. I said it.”

“Now, now, Sessionsopus,” said the Huckabeecyclops. “When the T-Rump said ‘beleaguered’ he could’ve been referring to, oh … the ‘B’ Leagues perhaps. You know, just a step below his ‘A’ League expectations. Sure. He just wants you to step it up a bit.”

She turned to the next patient.

“Mitchgetbacktowork, you haven’t talked to the T-Rump in weeks, if not months. Can I at least bring him back a wee bit of good tidings?”

The Mitchgetbacktowork broke out in a bluster.

“It wasn’t just me attacking the Obamacarus. Oh, no. Seven years to repeel and regurgitate. What did he expect? That skin was like leather! You tell him I hope he chokes on his next helping of Caviaraptor legs!”

“No,” said the calming Huckabeecyclops, “I’m going to tell him your relationship with him is fine. Certainly there are going to be some policy differences, but you two share so many goals.”

“Do me a favor and just point him to the Caviaraptor legs.”

The Huckabeecyclops refocused her wandering eye.

“Saveyourenergyrex. You’re joining us today for the first time. Why is that?”

“He called the T-Rump a moh-ron,” said the Sessionsopus with a chuckle.

“Who then made him go in front of all the Mediacircustops and say he had the T-Rump’s back,” said the Mitchgetbacktowork. “Were you really being held hostage?”

“Certainly not,” said the Saveyourenergyrex. “I plan on spending another year here and — god willing with these therapy sessions — I can step aside with some morsel of dignity.”

The Huckabeecyclops checked the sun.

“You’re late, Tenneseecorker. But just in time to share your own woes. As I’ve briefed the others, I’ll be returning to the T-Rump with unabridged versions of your statements in some neutral form of semi-confidentiality.”

“Er, what kind of statement?” The Huckabeecyclop’s eye was wobbling, as it did whenever she felt left out of the loop.

“I hijacked a few Trollertweeties of my own.”

There was an audible gasp of enthusiasm from the other patients.

“Yessiree, Bob,” said the Tennesseecorker. “I had them say the Marinegunkelly, the Maddogmattis and the Saveyourenergyrex were all that was keeping the Puhl-DePlugg Reservoir from plunging into chaos.”

The Huckabeecyclop’s eye whirled at how to spin ‘chaos.’

“Then,” the Tennesseecorker continued, “he lied about convincing me to stay, how I begged him. More lies, you know.”

The other patients nodded knowingly.

“Finally, I just told him what his Oval Dwelling is.”

“What’s that?” asked the Huckabeecyclops.

There were loud snorts of laughter. The Sessionsopus coughed up a cat.

“Oh, no,” said the Huckabeecyclops, reeling with confusion. “I’m sure, absolutely positive what you meant to say, what I will tell the T-Rump, is that his Oval Dwelling is indeed a … uh, professional meeting place.”

Her words however, were lost in the first cathartic laughter heard across the Milkanhoney Preservation in weeks. The Tennesseecorker rose from his haunches and waved to his cohorts.

“Good luck, good bye and thank God for the Trollertweety.”