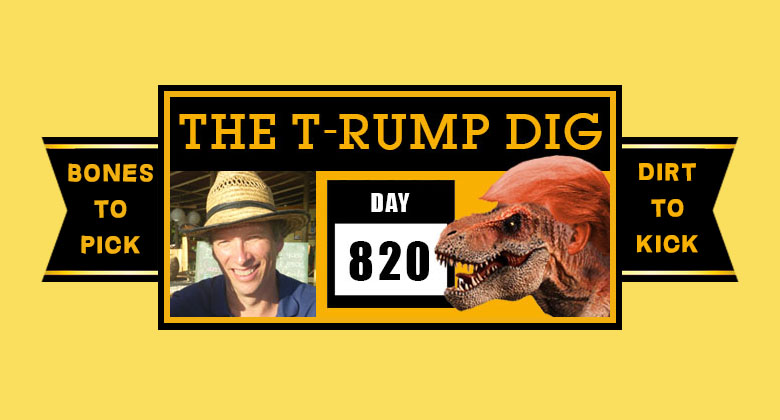 The large, squat, toad-like Williambarr gazed out at the massive gathering of Mediacircustops. It was Act 28 of his long-running play at upstaging the Muellersavus report, 400-plus footprints in the sand that had taken 22 months for the veteran Langleyops and his meticulous crew to stamp into Trumpassic Period history.

The Williambarr beamed at his latest public relations coup. Once more he’d put the Tyrumposaurus spin on the report, ingraining the T-Rump’s innocence upon all things collusive and obstructive — 90 minutes before the rest of the dino world even had a chance to see what he was talking about.

“Welcome, dinos,” the attorney dino general began. “We meet again. I’m not going to apologize for getting out ahead of the Muellersavus on this one. In a time where many dinos beg off, saying that’s above my pay grade. Well, heh-heh … it’s not above mine. No, sirree. There was no collusion with the Russodinos or obstruction of justice. The Tyrumposaurus and his Oval Dwelling dinos bent over backwards — quite a feat for some of these dinos who are practically invertebrates. That is, without backbone. Forget the fire and brimstone cries of ‘Fake News’ from the bully pulpit. It’s the thought that counts. The T-Rump could have asserted executive privilege but out of the clean, pristine goodness of his heart, he didn’t. Ahem. Whatta guy.”

The Williambarr dabbed his eyes. Try as he might, tears wouldn’t come. Did that make him a bad actor? Oh well, on with the show.

“It almost brings me to tears, and it should you too. I’ll tell you why the T-Rump behaved this way. He said he may speak with you later, but let’s call that a little white lie for now. The T-Rump entered an unprecedented situation when he entered the Oval Dwelling. There is substantial evidence … and this is a rare case where the Muellersavus and I do agree … that the T-Rump was frustrated and yes, even angered by the investigation undermining his leadership. So, based on this golden public relations opportunity I’ve orchestrated, I can’t say it enough. Don’t read the report too deeply, because there was no collusion. The Muellersavus however and the Rodrosenstein squatting behind me, who looks to have contracted some strange illness since arriving, both disagree. Remember, they’re beneath me. Apparently the Muellersavus has outlined ten instances of potential obstruction by the T-Rump. But I ask you. 10 instances? Is that all he could come up with? If you stack that up with the T-Rump’s 9500 lies, why that’s only 1 obstruction every 95 lies. I’d call that a 95 percent success rate. I’ll take those odds. Every time. You should too. Now then, I’ll take a few questions.”

The Shimonprokupecz raised a short arm, put on his best sneer and fired first.

“I was going to ask you if you’re making this up as you go along, but we all know the answer to that one.”

A few snickers from the scrum. The Shimonprokupecz continued.

“Seeing as how you won’t let us see the Muellersavus report for another hour-and-a-half, that leaves us with nothing to talk about.”

Uh-oh. This wasn’t supposed to go this way. The Williambarr took a deep breath. Yes, he’d signed on to be the fire wall against all things anti-T-Rump. He’d take the heat and vitriol for his esteemed leader because after all, in this day and age, bad news trumped bad like a sputtering volcano. Fortunately there was no lava that could burn through his boss’s orange, armour-like skin. Because his boss was one b-a-a-a-a-d dino.

“We’re onto you,” said the Shimonprokupecz. “We know your M.O.”

“Modus operandi. Thirty years ago when you were the assistant attorney dino general for the Bushfortyone, he wanted the Manuelnoriega out of the Panamaroot Canal. So you came up with some fancy footwork that allowed the Langleyops to go into a foreign land and take him out. Then when the Kongrus Kave wanted to see your legalese you declined. You finally told them your footprints only dealt with domestic matters, not foreign lands.”

“Except we finally found out two years later — after you left — that your words were all about foreign affairs. You lied to the dinos of the Milkanhoney Preservation.”

“There were six dinos, including the Casparweinberger, who were charged with crimes in the Iran-Contra Sandy Feetza scandal. The Bushfortyone had footprints in the sand that could implicate him so you advised him to pardon the six dinos, thereby giving him cover to do so and effectively end the investigation.”

“Hey, who has a question about the Muellersavus report?”

“We haven’t read it, remember?” came a chorus of several Mediacircustops.

The Williambarr had to think fast. This scrum was blowing up in his face.

“Okay, here’s a teaser on the report. The Huckabeecyclops lied.”

A collective yawn from the crowd.

“Okay,” said the Shimonprokupecz. “I’ll bite. Could you be more specific?”

“If you insist. Remember when she said the Comeyonus was fired because, let’s see if I can paraphrase here … there were countless members of the Langleyops who had lost faith in the Comenyonus? And then, when you Mediacircustops pressed her to explain to the rank-and-file Langleyops who disagreed with her, she said she’d heard from countless — there’s that word again — Langleyops that said very different things. Well, here’s the shocker. That was all baseless information. Lies. Both lies. Hey, I have an idea. Why don’t you go ask her about it?”

The Mediacircustops turned on their heels and stampeded for the Oval Dwelling. The Williambarr wiped his brow. Dodged another one. There was one solace in life. Lava did flow downhill.