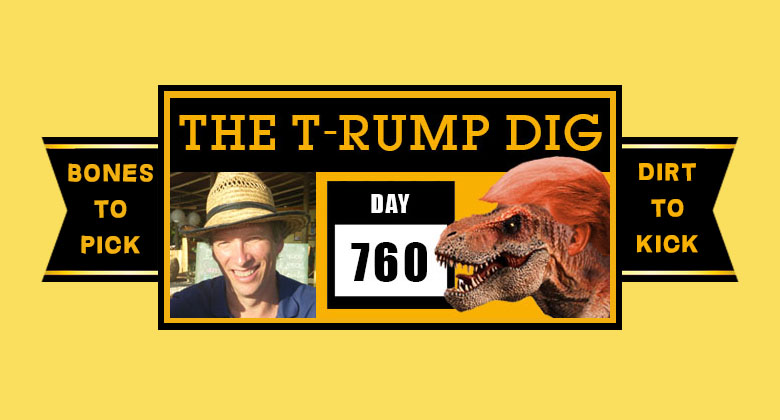 The Mickmulvaney ushered the Seanhannity, the Rushlimbaugh, the Lauraingraham and the Anncoulter inside the Oval Dwelling.

“I know,” the Anncoulter said with a smirk.

“You called us all here so the T-Rump could apologize to me in front of everyone for how terrible he’s treated me.”

“No, I mean.” The Mickmulvaney shook his head. He was at a loss to explain this level of insanity. “Come with me.”

He led them up a rocky staircase to the T-Rump’s Time-Out Tower where they found him lying back, staring at the sky, droning on to himself, emphasizing the end of every sentence in a sing-song voice.

“We have all the records, we have every RECORD. But we’re getting close to that point again where we’ll create NEW RECORDS.”

The T-Rump was oblivious to his visitors.

“He’s a babbling buffoon,” the Seanhannity whispered to the Mickmulvaney. “How long has this been going on?”

“Ever since his national emergency speech. All this chaos piled upon chaos. An emergency that’s not an emergency. I think he just finally snapped.”

The T-Rump droned on.

“What do you want us to do?” asked the Rushlimbaugh. “If you listen closely, I’m catching a lump of coal conservatism. I think he’s making some sense.”

“Are you kidding?” snapped the Mickmulvaney. “This is embarrassing. Listen to him.”

“I know,” said the Lauraingraham. “First, If you tell any dino what I’m about to say, I’ll scratch your eyes out, but I used to babble just like that when I was a little dino tot. My mother would … here, let me show you.”

She went over to the T-Rump and clamped her hands over his nose and mouth. The words stopped, his cheeks turned red, his eyes widened.

“That should do it,” the Lauraingraham said, letting go.

“I spoke with a couple of generals. They think this is FAR MORE IMPORTANT. I won’t go into details, but it didn’t sound too IMPORTANT TO ME.”

“It was worth a shot,” said the Lauraingraham.

On went the T-Rump.

“But any deal I make with China, the Cryingchuck’s going to STAND UP AND SAY … Oh, it should’ve been better. Y’know what? That’s not ACCEPTABLE TO ME.”

“He’s all over the place,” said the Anncoulter. “He can’t hold onto one simple thought. Maybe one word might work. Hmm. Let’s go back to his first word. Wall. P-s-s-s-t, T-Rump! The wall.”

“We have chain migration where a bad person comes in, brings 22 or 23 OR THIRTY-FIVE of his family members because he has his mother, his grandmother, his sister, his cousin, his uncle, THEY’RE ALL IN.”

“Close,” said the Seanhannity, “but still not close enough to say that I even know the guy.”

“The Seanhannity has been a terrific, terrific supporter OF WHAT I DO. The Rushlimbaugh, the Lauraingraham. I like the Anncoulter but she’s off the reservation, but any dino that knows her UNDERSTANDS THAT.

The Anncoulter rushed the T-Rump. The Mickmulvaney grabbed her as she went by, hauling her to the ground.

“You can’t hit him. He’s defenseless.”

“He will be when I’m through with him.”

“Sit! Sit down! You’re fake news. You HAVE AN AGENDA. The numbers that you gave are wrong. Your statistics are far worse THAN THE ONES I USE.

“Can’t you guys do something?” the Mickmulvaney pleaded from his knees. “I’m going to go bonkers if I have to listen to this much longer. I didn’t take this job for – for … this.”

“If the Main Stream Mediacircustops sees this,” said the Rushlimbaugh,  “we’re doomed.”

They squatted helplessly beside the T-Rump.

“I don’t want to speak for the Obamarus, but I believe he would’ve gone to war WITH THE KIMJONGADON. In fact he told me he was so close to starting a big war WITH PING PONG NORTH.”

“That’s it,” said the Seanhannity. “Somebody has to do something.” He stepped forward. “What doesn’t kill you will make you stronger. Or improve ratings.”

He stood over the T-Rump, staring down at the verbally challenged leader.

“We have to fight fire with fire.”

“It’s a shame we know what fire is but we’re too dumb to make it.”

The Seanhannity leaned down close to the T-Rump’s face, took a deep breath and shouted.

The T-Rump’s face twitched. Except the non sequiturs didn’t stop. They sped up.

“Ohmigod!” said the Mickmulvaney, turning to the Seanhannity. “What have you done?”

They could only watch as the Grandoldparty grand poo-bah verbally pooped the bed.

“They sued us in the 9th CIRCUIT … and we LOST … and then we lost in the appellate DIVISION … and then we went to the Supreme COURT … and we WON … and it was very interesting because yesterday they were talking about the ban.”

The T-Rump blinked his eyes and stopped talking. His handlers gasped. The sing-song agony was over.

The T-Rump propped himself up on his elbows.

No answer came from the shocked dino’s gaping mouths. The T-Rump studied them carefully.