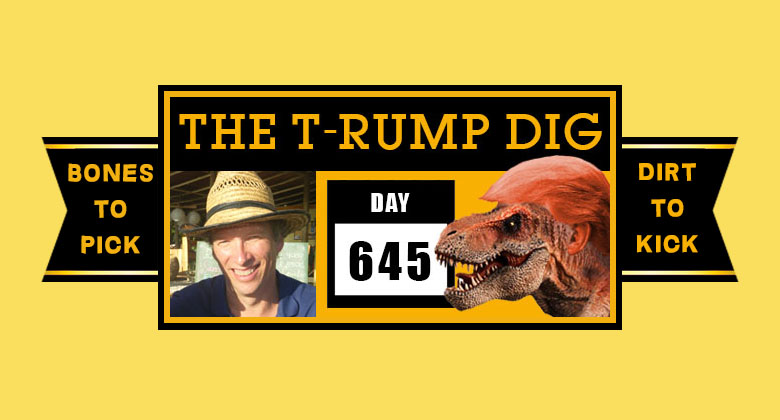 Billyjoe and Billybob, a pair of Red Neck Nukkledraggerz from the very hilly Billy Blue Bayou, settled into their side-by-side squats for the upcoming Tyrumposaurus rally at the Carolinas’ Charred Flats. The two cousins were hard-core T-Rump followers, part of his rock solid base that would just as soon bite the head off a Donkeykongrus dino as look at them.

“Do yuh think the T-Rump is gonna come out and roar like a wounded Wartyhogdog?”

“Do we get our feet wet when we pee? Of course he will.”

“But these ten Pipebombasaurae an’ all.  They’re kinda like our cousins, ain’t they?”

“We got lotsa cousins, Billyjoe. What the hell are ya gittin’ at?”

“Well, we came hey-uh fo’ some hootin’ and hollerin’.”

“Ain’t no lie, Billyjoe. With any luck, we gonna crack some ol’ walnut-heads tonight.”

“So then, what if the T-Rump turns tail … and he goes soft-belly up?”

“That hurt me more than you, Billyjoe.”

“You be wise to hush yo’ mouth about the T-Rump goin’ soft-belly up. That’s traitor talk, it is.”

There was a commotion before them as the T-Rump rally team stomped across the flat rock stage area, raising lots of dust and more fanfare as the kingpin of the Trumpassic Period approached.

“There he is,” said Billybob. “Our mighty, esteemed leader. Pipebombasaurae, my slime-leaking eye!”

The T-Rump took the stage, grinned his cheesy grin and waved his short right arm.

“Charred Flats! Great to be here!”

The T-Rump base roared their approval.

“First off, I just wanted to say we’re here because we’re winning … and that’s all that matters. The Pipebombasaurae? Please. … Okay, so there were ten of them. But they have no bite. You wanna see bite? Look at these chompers.”

He opened his mouth wide, his slobbery tongue flew out and the crowd recoiled for a second with the sporadic “E-e-e-w” … before finally applauding, albeit nervously.

“Alright then. I have it on good authority — my authority — that the Mediacircustops brought this behavior upon themselves and some — I shouldn’t say it but I know you want me to — not-so-innocent dinos because, well, what goes around comes around. Am I right? The truth hurts. Or it could hurt. I don’t know. But it’s the Mediacircustops’ fault. Their fake … negative … made-up news and views have finally crossed the line.”

“Lock her up!” shouted Billyjoe, bouncing in his squat.

He held up both hands. The base laughed. Billyjoe turned to Billybob.

The T-Rump glared at his dino faithful.

“I’m playing nice now. … A-a-a-n-n-n-d now I’m not. I would love to bring every dino together, I really would. But then we’d have that nasty caravan of mean, rotten Latinonachos and all their mean, rotten babies. I hate babies!”

Billyjoe looked at his cousin.

“Do we hate babies, Billybob?”

“Need I remind you,” the T-Rump continued, “there are 11 days until Midterm Mayhem and we need every dino — every body-slammin’ dino — with us. That means you. The Mediacircustops have brought us here. You heard the Foxsquawkbox. The  Pipebombasaurae is a conspiracy theory set up by the Donkeykongrus. It’s all a false alarm, folks!”

Trump raised a claw to the sky.

“YOU!” shouted the audience.

“Fake news begets violence. We need a defensive weapon, don’t we? What’s it gonna be?”

“I like it,” the T-Rump said with a triumphant nod. “Let’s give each other a good ol’ body slam. Practice makes perfect.”

The T-Rump acted out his signaure body slam maneuver and the crowd followed suit. Dinos of all shapes and sizes were thrown to the ground with resounding thuds all around.

“Me first,” said an excited Billyjoe.

Unfortunately, he outweighed Billybob by 450 pounds. Billyjoe threw his cousin down to the ground with such force and enthusiasm that Billybob was knocked out cold. Billyjoe looked down over his fallen cousin flat on his back.