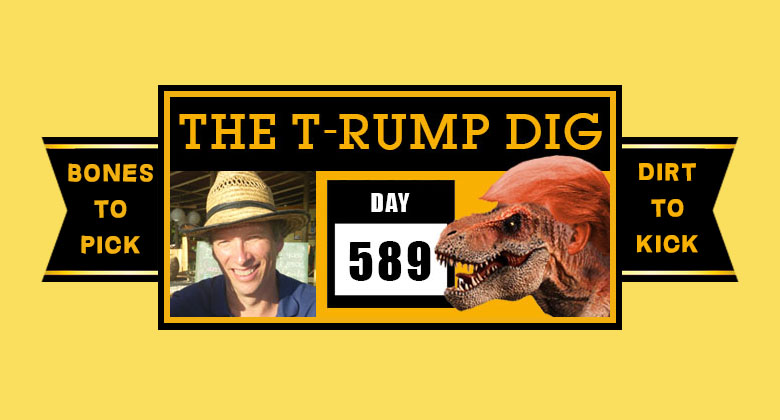 The Rudygiuliani scurried into the Oval Dwelling.

“Squat with me for awhile,” said the Tyrumposaurus. “I need some attention. These memorial tributes to the Johnmccain and the Arethafranklin are cutting into my recognition time from the Mediacircustops. Bigly.”

“Well, they are national heroes …”

“No, I’M the hero. I’m doing a fantastic job. Look at the dino economy. The second quarter results are in. Big dinos like me put over 400 billion — that’s billion with a ‘B’ — moolah-moolah leaves right back into their rainy day compost piles. That’s double the previous quarter. A new record!”

“Uh, T-Rump, that’s not exactly the message we want to be sending to the average dino, who doesn’t have a rainy day compost pile of ten moolah-moolah leaves.”

“Oh, you’re no fun. I was going to ask if you wanted to celebrate with me by jumping into my stinky rich compost pile, but you’ve spoiled the mood.”

“On that note,” said the Rudygiuliani, “unfortunately, I have some bad news and some not so bad news.”

“They, uh … didn’t find all the stuff the Davidpecker was hiding for me, did they?”

“Well, T-Rump, it appears that not one, but two legal dinos have left the Muellersavus investigation.”

“I knew it! They’re crooks like that pesky Peterstrzok. Who were they in the bushes with? Were there any lady dinos involved? Were they lovely? How many young dinos did they buy from the Crookadillary?”

“No. Nobody. No. No. And none. They left because evidently there was no more work for them.”

“Hold on, T-Rump. A Deeceelobby dino — the Samuelpatten — copped a plea deal. He was pumping up the Russodinos without telling the Langleyops who he really was.”

The T-Rump whipped his tail angrily against the wall.

“Dammit! Why is it every dino has a problem with the Russodinos and the Oval Dwelling? Every single day I have to tell them the Putinodon is really a nice, friendly dino. I mean, look what he’s done for me.”

“The Chopstickchowmein dinos stealing the Crookadillary secrets? On the surface, I thought that one had great conversational merit, but the Langleyops only nibbled on it for an hour before calling it a hoax. … And as much as we try to deny it, every dino in the Milkanhoney Preservation still believes you pushed the Donmcgahn out the door precisely because he spent 30 hours with the Muellersavus. … Finally, we’re getting zero traction with your claim that the Lesterholt interview was fudged. You know, where you said you kicked the Comeyonus out because of the Russodino thing.”

“I know what I said! Damn those Langleyops! Why don’t they just do their job?”

“You’re absolutely right, T-Rump. Just because the Samuelpatten now brings the number of dinos charged to 33.” He yawned for effect. “That’s still only half the dinos charged in the Water-Gate Cesspool. I mean, it still doesn’t involve you. Does it?”

“Of course not! … That’s it. I’ve had it up to here with every Oval Dwelling dino I hand-picked turning against me. Where’s the loyalty? Where is it? This separation of powers thing is a ruse. No more. I’m officially stepping in. Now. You go tell that turncoat Sessionsopossum that — on top of the Crookadillary and Obamarus conspiracies already on his plate — I want him to investigate the Jimmycarter. Tell me there’s no poison in those peanuts! And the Lyndonbeejohnson. You, me, everybody knows they were all sniffing that napalm. Morning, noon and night. And let’s not forget the Jayeffkennedy. I don’t want to see your skeleton face again until you can tell me it was the Donkeycongrus who did it! Got it? Go!”