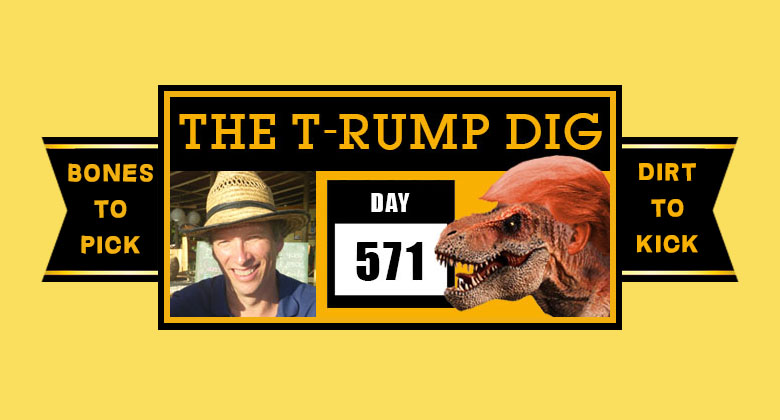 An anxious Rogerstone asked the Manhatinhandmadam as he welcomed her into his small, sparsely decorated cave. He liked it that way, for quick exits to chase down any Mediacircustops looking to fill a slow news day.

“Aren’t you going to kiss me hello?”

He leaned in for a quick peck, leery of her lips that were too full, too rubbery. Thankfully it was okay for him to close his eyes. (Smack.) Ugh. Mission accomplished.

The other two dinos in attendance, the Andrewmiller and the Randycredico leaned forward, all ears.

“But you said I should, that’s what you told the Mediacircustops.”

“That was for the Mediacircustops! For the Muellersavus, I needed you to lie your face off.”

“Roger, you know I hate it when you say that.”

The Manhatinhandmadam had a facial skin condition made worse by years of bogus beauty muds and lagoon oils recommended by the neighborhood snake.

“That would never happen. The T-Rump is passing out pardons like Happy Hour swamp water. You know I would put in a good word for you. … But what exactly did you tell him?!”

“Kristy! We’ve known each other ten years. We even had a dino tot together!”

“Who you refer to as ‘The Accident.’”

She had him there. He needed time to think.

“Ahem. Believe it or not, last week, the Betsydevos had an idea. Yes, I know. Amazing, isn’t it?”

“That’s great, Roger, because most of my jokes, you usually don’t.”

“No, dummy, I have an idea. Listen up, everybody. Andrew, you’re dodging the Subpoenasaurus even though you know nothing …”

“And you, Randy, are the back channel to everything and you have agreed to speak with the Muellersavus.”

The Andrewmiller and the Randycredico nodded slowly, unsure where this was leading.

“Can’t you see the problem?” said the Rogerstone. “We’ve got this ass-backwards!”

The two dinos instinctively looked at each other’s rear ends.

The Rogerstone groaned, frustrated at the cat and mouse game he was playing with a couple of cheeseheads. Corrupt but intelligent help was s-o-o-o-o hard to find in the Trumpassic Period. But he knew how best to keep his name on the Mediacircustops tongues and his own butt out of jail. He hoped.

“Okay, so it seems the Muellersavus wants to talk to everybody here but me. That makes yours truly the target.”

“Oh, Roger,” said the Manhatinhandmadam, “you’re so smart. Your dream is coming true. Did you want me to make footprints in the sand for this? ”

“Not just yet. Now then, my good friend who I rarely have dinner with, the Julianassange, is still holed up at the Ecuadorian By-the-Sea. Andrew, I want you to seek refuge at the Peruvian By-the-Sea and you, Randy, the Chilean By-the-Sea.”

“Excuse me, boss,” said the Andrewmiller. “Um, why don’t we just join Julian?”

The Randycredico scratched his noggin.

The two dinos looked at him like he was speaking Swahili.

“The more dino nation’s by-the-sea locations we hole up at, the United Dino Nations might even step in. They take forever and nothing gets done. It’s perfect! Think of the pandemonium — and I’ll be in the middle of it!”

The two dinos looked at each other, wondering if the Rogerstone actually was thick as a stone. Even the Manhatinhandmadam pretended she hadn’t heard. Their boss frowned.

“Why are you all looking at me like that?”

“I know,” said Randy. “The Muellersavus is waiting for the one dino that is going to roll on the Tyrumposaurus. That could be you, Roger. You could go down in history as the dino that sank the T-Rump.”

A chuckle escaped the Rogerstone.