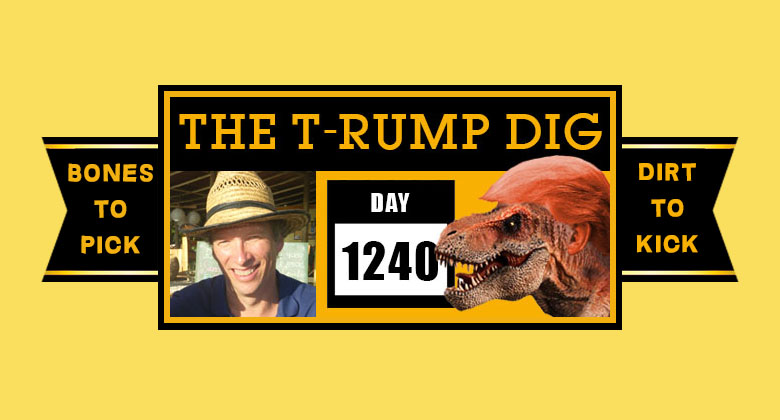 “Okay, Stephen, battle plans. Where are we?”

The Stephenmiller grinned devilishly. Inwardly his evil heart did cartwheels through rings of fire as thoughts of indiscriminately tossing immigrant babies to land where they may danced in his head. He absolutely loved his job.

“Well, T-Rump. We’re still getting great mileage out of your, heh-heh … walk in the park. Because that’s what we need to call it.  All those dinos are protesting and you just took a walk in the park.”

“I just want to say on that point, that I was out of line. I had no business being there. I want to apologize to the Dino Nation for politicizing my position. It, uh … seems I have morals after all.”

“Oh, stop it. I don’t care what your morals look like. Go put’em up on the damn wall.”

“Don’t you start with me, Esper. It’s you who got him going on this, wasn’t it? I don’t want you speaking to him any more.”

“I’ll tell you what’s in your job description. I make this up as I go. You’re already on thin ice. Well, double that. Double thin ice, that’s where you are. And Milley? Where does that leave you?”

“Don’t get cute with me. Dog House. And you remember that for me because I don’t take notes, I don’t read, I just give the orders and … you two … oh, you two. Your days are numbered. And you can just keep guessing as to what day that is. I’ll get back to you on that. Don’t you worry. And do NOT forget to remind me. Damn generals. Can’t win with them. Can’t win without’em. Carry on, Stephen.”

“Ahem. I just want to say, I love it when you get mad, boss. It makes me want to lower migration levels. Where was I? Oh, yes. That 75-year-old dino from Buffalo-Shuffle, the, uh … Martingugino. Damn exotic species. He’s got a bad head wound from the authorities supposedly knocking him down, but the Antifasaurus angle and our domination theme is playing well with our base.”

“Good, dominate the jungle. And you call that a Buffalo shuffle? Are you kidding me? Worst Buffalo shuffle I’ve ever seen. Pure embellishment. The worst.”

“Your trip to Dallas-Lone Star? I’ve lined up several black dinos. No radicals, I promise. And you’ll be discussing anything but race.”

“Excuse me, T-Rump?” It was the Bencarson. “I, um … I told the Jaketapper last week that you were going to make an announcement on … this, um … this race thing?”

“Oh you did, did you? Well, that’s what happens when you don’t speak to me first. Blindsided again. Dammit! What is with you dinos? How come I’m always the last to find out around here? You’re just lucky I don’t fire you all. It’s only because the Foxsquawkbox has told me they’re running short of dinos. I may have to ask the Hopehicksbagotrix if she has a cousin. Don’t tempt me. If you guys can’t stay on message then don’t give a message. Just shut up and walk away. All my senators are. How many times do I have to say it? Transparency is kryptonite. Stephen?”

“You’re gonna love this, T-Rump. Okla-Tulsa. I get chills just thinking about it.”

“Never heard of it. What’s so good about it?”

“We’ll schedule a rally there on Juneteenth.”

“What the hell is Juneteeth?”

“A big day for the black dinos. Get this, Okla-Tulsa had a big dino race riot a hundred years ago and there was death and destruction. Lots of death and destruction. On both sides. Wait, it gets better. The Mediacircustops will ask you to say something about the 300 black dinos that were killed there. We’ll tell them that with 1,000 dinos dying from Coronavirus every day now, when you think about it, well … 300 isn’t really so bad.”

“Good. That’s good, Stephen. What about the situation in Seattle-by-the-Sea? Did the dino mayor there listen to my advice and take back her region with brute force — big, dominating brute force — like I told her to?”

“Well, actually, she made the trip here to speak with you personally. Should I let her in?”

“Of course. Oh, you don’t have to leave. You’re all welcome to stay and listen to her grovel. I love the groveling part.”

The Seattle-by-the-Sea dino mayor, the Jennydurkan, entered the Oval Dwelling. A beetle on the wall busied his antennae, beating an imaginary drum in the air.

Chewin’ on your silly tweet that came to me

Did you even sleep last night?

Gotta say, your finger wag, was that at me?

You’re just looking for a fight

Coronavirus runnin’ right thru this place

We should all be stayin’ home

Except you keep ignorin’ facts in your face

Man, you need to change your tone

Well, the Georgefloyd death really knocked you out

You left your heart behind

But most the folks, gonna sing and shout

Well, the Georgefloyd death really knocked you out

You left your heart behind

But most the folks, gonna sing and shout

Show me where it says you push an old man down

Take the blame, you caused the harm

Can you hear the many voices ringing out?

A nation sounds the alarm