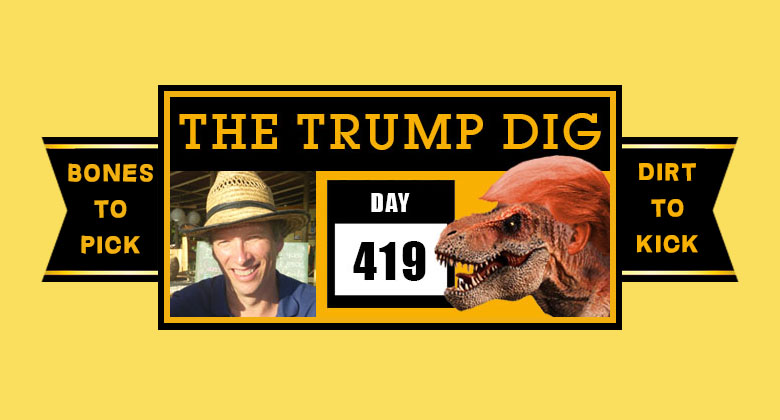 With the turn of a phrase came the winds of change, sweeping yet again through the Puhl-DePlugg Reservoir, splashing more mounds of mud in the face of the muddy-faced in this chaotic, quixotic quagmire, the Trumpassic Period.

Sadly, the once stalwart Saveyourenergyrex had stuck his neck out too far, publicly admonishing the Putinodon and his ruthless lot of Russodinos for their obvious role in sending a Nervegasattackaurus upon the Sergeiskripal, a former Kayjeebeeops gone rogue.

The Tyrumposaurus promptly fired his Secretary of State. Some dinos claim it was retribution as well for the Saveyourenergyrex having months before privately called the T-Rump a moron. Many dinos wanted to know what he really thought of the T-Rump.

Thus, another opening to fill. Another itch to scratch. There were few walnuts left to crack, few daring dinos on the T-Rump’s Triple-S List of sidekicks, sycophants and souls for sale.

“All right,” said the T-Rump. “We’re all here.” He looked around the Oval Dwelling at the just-glad-to-be-here faces of the Mikepompeo, the Devilnunesmemo and the Stephenmillerus.

“We all understand the disgusting horror you’re faced with when having to personally dismiss a dinosaur. It obviously points to some messed-up migration path they failed to report. Vetting. We need more vetting.”

He made a bullet-point mental note for his next speech for the T-Rump.

“Be that as it may,” said the T-Rump, “Nunes, sorry about raining on your parade. Your quick whitewash of the Dino Home Committee hearings was great, just great, and deserved more Grandoldparty frenzy. But we finally got it out there. No collusion. I had my Trollertweeties positively squawking throughout the land!”

“However,” the T-Rump continued, “I needed to steal the Mediacircustops news cycle today for the grave, very grave … the most serious mistake the Saveyourenergyrex has ever made. Is it too late to call him the Shutyourmouthrex? I mean, can you imagine him actually blaming the Putinodon for what happened to that Kayjeebeeops? Not on my watch. The Putinodon means too much to us. Er … me.”

“I’m your dino, T-Rump,” said the Mikepompeo. “I admit the rest of my Langleyops colleagues have been jumping up and down saying the Dino-Who-Can’t-Be-Named meddled in your rise to power, but remember, I have never ever mentioned the “P” or the “R” word in front of you.”

He was referring of course to Putinodon and Russodinos. Countless T-Rump aides had been released into the Wild Beyond the Wild because their sycophant status clearance had confirmed minimal brain activity.

“Wait a minute,” said the Stephenmillerus. “What about me? Secretary of State? I thought it was my turn.”

The Stephenmillerus rose from his squat.

“I’m a 55-year-old trapped in a 32-year-old body.” He stamped his feet impatiently. “My bio-political clock is ticking!”

“Settle down. You are after all my Senior Advisor. One of them anyway. That’s a great job title.”

“Well, I do appreciate it, T-Rump. It just sounds so … slapped together.”

“That reminds me,” the T-Rump said, turning to the Mikepompeo. “That old Marinegunkelly has got to go. I don’t think he likes me. I’m just not feeling it with him. How’d you like to be my Chief of Staff too?”

“Aw, come on!” said the Stephenmillerus.

The T-Rump ignored him.

“Would you like that, Mikey? Can we do that?”

“You can do anything, T-Rump.”

“Great. I’ll keep it in mind. Now, about those back roads to the Moscovian Bluffs. You know, those ones along the Incognito Way … ”