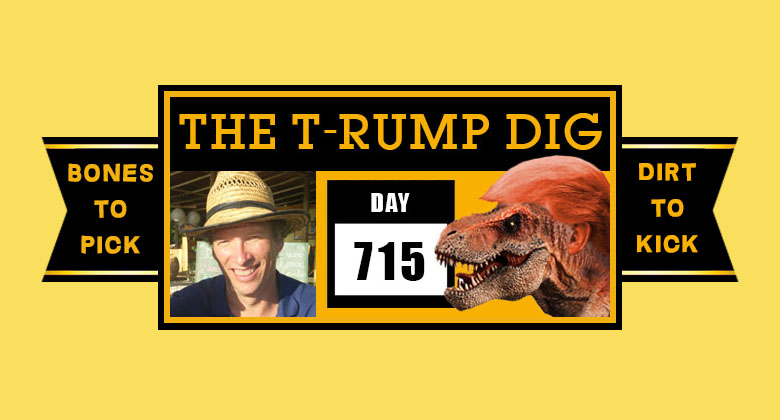 It was the first day of a new world in the Puhl-DePlugg Reservoir. The Tyrumposaurus, the Stephenmillerus and the Huckabeecyclops hunkered down in the Oval Dwelling, commiserating over that very fact. The aging wonder, the Nancypelosi, and the incoming wave of new Donkeykongrus dinos had just finished taking the solemn Oath of Nether Regions. That is, they promised to give any tail-dragging Grandoldparty dino a kick in the butt. For all to see, it was the new dino transparency.

“She can’t do this to me!” the Tyrumposaurus wailed, lashing his tale against the battered Whaling-Away Wall behind him.

“They’re not budging on the Great Tex-Mex Divide,” said the ever despondent Stephenmillerus.

“They haven’t investigated you. Yet,” the Huckabeecyclops said, clinging desperately to a smidgen of hope.

“No!” the T-Rump roared. “Nancy’s getting all the attention! Where are my Mediacircustops?”

“We can put in a call to the Foxsquawkbox,” said the Huckabeecyclops. They’re always ready to kiss your bone spurs.”

The T-Rump paused to reflect on the latest display of supreme sycophancy shown towards him. But since none had occurred in the past 24 hours, all memories save for family names and morning scalp maintenance escaped him.

“The Russodinos are holding the Paulwhelan hostage. Rescuing him would send your ratings sky-high.”

“No can do. Read my toothy grimace, the Putinodon is always right and my Langleyops dinos can’t find their tails with both hands. Look at the fascinating story the Putinodon came up with since we grabbed the Mariabutina. Great story. I’m sure the rube, tin-tooth dinos will eat it up.”

Another idea pinged the Huckabeecyclops.

“For the Solitary Sinkhole, you idiot,” the Stephenmillerus cut her off. “T-Rump, regarding the Nancypelosi …” he said, rubbing his hands in wicked glee. “We’ll head her off at the pass.”.

“Her daughter — her daughter said that Nancy could cut your head off and you wouldn’t even know you’re bleeding.”

Feeling woozy, the T-Rump slumped forward. The Stephenmillerus grabbed him before he hit the ground. The antagonistic analyst turned to the Huckabeecyclops.

“Can you run with that? Spin Nancy’s ‘cut your head off’ quote into some wild threat we can use against them?”

“I don’t know. After all, we are depraved, roaming, foaming-at-the-mouth dinosaurs.”

“Speak for yourself, Huckabee,” the T-Rump snorted, shaking off his nausea. Now then, Stephen. What are we going to do?”

Thirty minutes later, the Huckabeecyclops paraded in front of a hastily called Mediacircustops briefing. Behind her, half a dozen hefty Bald Borderpatrollus dinos traipsed in and lined up behind her, making for an impressive, if not impromptu border of their own. The Huckabeecyclops flashed her challenging eyeball at the news hungry dinos before her.

“Welcome. Before you start yelling at me, dare I remind you that I have the Tyrumposaurus right behind me.”

“Hah!” came a cry from the front row. “You’re nuts. That’s your best lie yet. The T-Rump has never shown his face here. Never.”

The dinos around him nodded their heads and laughed. Their laughter quickly turned to gasps. They blinked, slobbered and rubbed their eyes at the miracle before them.

The T-Rump was at the Mediacircustops briefing. A Trumpassic Period first. He stepped to the fore.

“Alright, alright. Don’t all clap at once. I’m here to tell you I’ll say one nice thing about the Nancypelosi. It would be nice if she’d come to her senses and end this government shutdown. Sheesh! I like my executive time but this is ridiculous. Now then, these fine dinos behind me are all guards straight from the Great Tex-Mex Divide. They are there so you have the freedom to remind the Milkanhoney Preservation how important I am. I’d let them each step up and tell you their harrowing stories of how they’ve fought tooth and nail to keep the marauding, the rampaging and the bloodthirsty Latinonachos from stripping our freedoms away like meat from a bone … but this is my Great Tex-Mex Divide, my demand for more moolah-moolah leaves and my political stunt to put your focus back on me.”

The Stephenmillerus winced. He lies all day long and then picks the worst time to be honest.

“That will be all” the T-Rump said, glaring sternly at his audience. “Thank you, thank you and good-bye.”

He turned and led his entourage away.

“What? No questions?” one Mediacircustops said to another. “You call that a briefing?”

“Yeah, where’s the beef? Didn’t he say something about meat from a bone?”