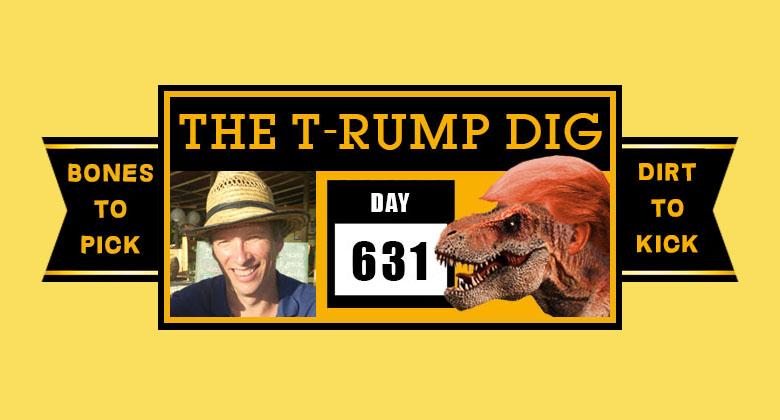 The Mediacircustops gathered around the hastily called gathering inside the Oval Dwelling. The Tyrumposaurus squatted on his rocky throne with the ever dour Stephenmillerus at his side. The Mediacircustops had received last minute notice that the Brettkavanaugh and the Kanyewest would be in attendance. Something about trying to sway female dinos and the Blackvotersaurus to the T-Rump side of the pecking order. The Stephenmillerus leaned in to the T-Rump.

“You sure you want to do this out in the open? We just lost the Nikkihaley. We can’t control this.”

“But we can get the Joelzamel and the Israeli-Lite dinos for another two million moolah-moolah. Or the Russodinos? Either group would gladly help us hoodwink the masses, giving us victory in the midterm battles.”

“How many times do I have to tell you? My dino pop is dead. That moolah-moolah windfall is a compost heap now. Repeat after me. The Georgenader paid the Joelzamel the two million out of the goodness of his heart. Don’t look at me like that. And the Sanctionsaurus is a no-go with the Russodinos. Trust me. This is gonna work.”

The leader of the free-running dino world turned to the large gathering.

“Welcome everyone. I’m doing a great job and have a pair of dinos here today who will back me up on that. We have the Brettkavanaugh, fresh from his victory over the disastrous Donkeykongrus and the Kanyewest, fresh from … wherever. Brett, why don’t you go first with the accolades?”

“Stop!” said the Kanyewest. “Just stop right there.” He jumped forward in front of the Brettkavanaugh. “You can leave now. I’ve got this covered. All of it. You’ve forgotten who has the monolithic voice. That’s right. Move your love on over there.” He pointed to the sidelines.

The Brettkavanaugh thought better of saying it. He gave the T-Rump his best pained expression, but the T-Rump nodded for him to move aside. Some of the Mediacircustops smirked. This was shaping up as just another day in the Oval Dwelling.

“Welcome to the alternate universe,” said the Kanyewest. “If some of you are feeling imprisoned from killing six dinos, I want you to know there are infinite amounts of universe and that I am you and I have to set you free. Mind you, I didn’t have a lot of male energy growing up and now that I have a family, well … I still don’t have a lot of male energy goin’ on. It’s beautiful though.”

The Kanyewest pointed at the T-Rump.

“You though, you made me a super dino.”

Behind a smile, the T-Rump gritted his teeth. He hated it when other dinos called themselves super in front of him. This was his Oval Dwelling.

“You,” said the Kanyewest, “are the dopest.”

“Did you just say I don’t look good?”

“It was from the soul. I just channeled it.”

The T-Rump looked at the Stephenmillerus who returned a confirming, silent nod.

The T-Rump raised a claw.

“Did you hear that everyone? He called me a hero. But I’m not going on a journey. I’m staying right here.”

“You do that, T-Rump. But I’m a super dino and I’m going to go all the way signaling, because time is a myth. All we have is now, all we have is today.”

The T-Rump looked again to the Stephenmillerus for clarification. This time the senior advisor returned his dreaded look of disdain. The show was over. The T-Rump rose from his squat and joined the Kanyewest.

“Kanye, is that your stomach rumbling or Hurricane Michael? You must be starving. Let’s go eat. Now.”