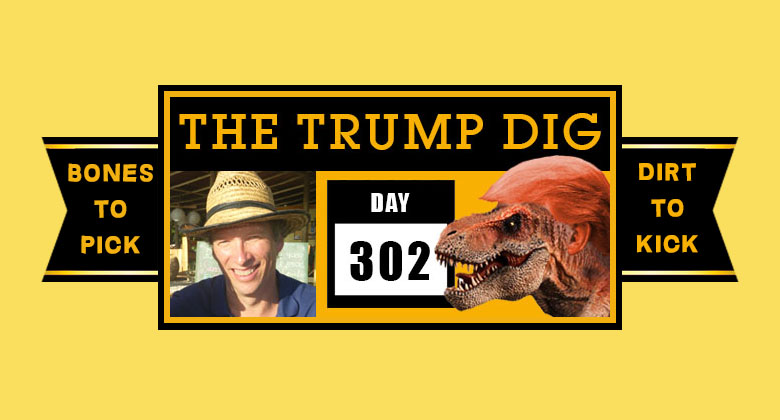 The Tyrumposaurus lay on his back in a comfy pile of eucalyptus leaves under the We Teach People How to Treat Us Tree. The doctor was in. The T-Rump squinted at the midday sun.

“Do you think the three Trojanballboys will say thank you, T-Rump? They were headed for ten years in the Solitary Sinkhole.”

The Doctorphilsofa shook his head, his steely gaze riveted upon his patient.

“Why are you referring to yourself in the third person?”

“It obviously concerned you enough to send out your flock of trollertweeties to alert the land. Was this a cry for attention?”

“I’ll tell you who’s crying now. That Alfrankenstein. Really bad, really sad what he did to the Leeanntweeden.”

“Interesting. Similar charges have been made against you. What were you doing with lady dinosaurs 2, 3, 4, 5 and 6?”

“Liars. All six. Twelve. However many.”

“You’ve said nothing on the Judgeroymoore situation. Now’s the time to come clean. He is a member of your group. Don’t you think the dinosaurs of the Milkanhoney Preservation deserve guidance on this?”

“Let the Bamahama dinosaurs of Crimson Creek decide. I backed the Lutherstrangia — and this is the thanks I get!”

The Doctorphilsofa scratched a lower itch.

“You do understand your need to hear people thank you is part of a deep-seated need for acceptance.”

“Hah. I always ask people to thank me.”

“Maybe not in your world.”

“Who do you think you are?”

The Doctorphilsofa glared at the T-Rump, waiting patiently.

“Do you know who I am?” It was a default response the T-Rump still found humorous.

“I asked you first.”

“Ahem, I am the leader of the born free world.”

“So why does it feel like every dino is being held hostage? But let’s move on. When is the last time you thanked another dinosaur?”

The T-Rump closed his eyes and thought hard. A minute passed. An excuse finally arrived.

“You see, it’s all about expectations.”

“Now that I’m the boss, yes, that’s pretty much how it works.”

“And anything the Mediacircustops say is …”

The Doctorphilsofa squeezed his claws together.

“And so you reign over every dinosaur from the Bullee-Tar Pit … referring to the Elizabethwarrenpeace as Pocahontas, calling the Kimjongadon short and fat and labeling the Tennesseecorker as an incompetent lightweight. T-Rump, he’s on your team!”

The Tyrumposaurus smiled smugly, picking his teeth with a claw.

“You know, I could gobble you up right now and get away with it.”

“Spare me. Are you ready to accept some advice?”

“You did say you were going to give me something. Advice? Is that all?”

“And you’re not missing one of them.”

“The only thing I’m missing is from you. Did you thank me yet?”