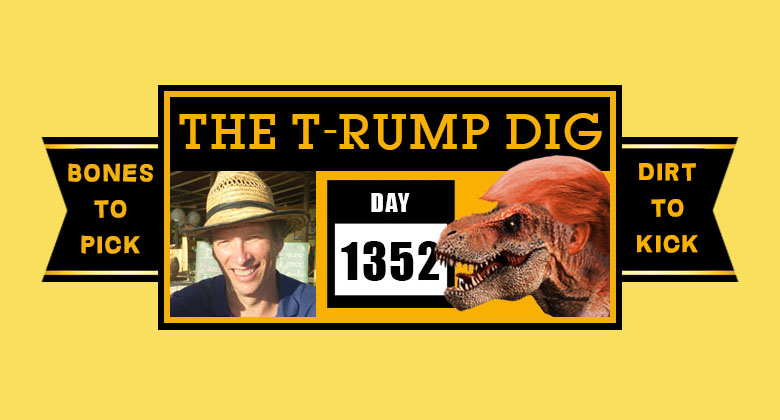 The Chriswallace sighed deeply. What had he done to deserve this? Here he was, moderating the first Tyrumposaurus-Joebiden debate, a political landmark event 70 million dinos had showed up for. Wallace had hoped to pin this debate as the hallmark of his career, but all he could channel at this point were the 70 million salivating dinos behind him thinking the same thought.

Don’t just sit there, do something!

The T-Rump had belittled, besmirched and basically interrupted the Joebiden every time the poor dino had opened his mouth.

The Chriswallace had tried. Oh, Lordy, how he’d tried to control the uncontrollable. He’d interjected nicely at first, then raised his voice to match their level before finally lowering himself, as an abused victim might, cajoling the T-Rump that perhaps he would actually enjoy the next question. If only to stop the ranting and raving. This was after all the leader of the free-running dino world. And he now had to ask this important question again because the free-running dino world depended on it.

“Will you denounce the white-striped supremacy dinos?”

“What do you want me to call them?”

“I’m not talking to you,” snapped the T-Rump. “I think I’ll just debate Chris now. You’re not from a blue region, are you, Chris? Because all blue region dinos are nasty dinos. Very nasty.”

“Oh, no you don’t. We’re waiting for your response, T-Rump. And no vague recollections or banal, dust in the wind generalities. We must have specifics. I would like a direct, full-throated repudiation so that this dino democracy may actually outlive you.”

“It’s all the left’s fault. Those Antifasauarae, you’d better watch out, Joe. They’ll overthrow you.”

That finally shut up the T-Rump for a few seconds. The Chriswallace took another stab.

The dino divider-in-chief harrumphed and frowned.

“Alright then. But I’m going to sing my response.”

“I’ve heard of dog whistles but this is ridiculous.”

The Chriswallace would take small victories where he could, no matter how sublime.

And so somewhere in the wasteland that was Covid a dino began snapping his fingers to an old familiar beat.

When the night … has come

And I raise my thumb

And then soon with my tweet you’ll see why

So the votes, when they’re made

Oh, when I feel betrayed

So be strong and stand back

And that’s why this election is

A good rumble this fall

And the Biden should stumble, he ain’t spry

Just as long as you stand back

Oh, stand back, I’m your guy

So, until there is trouble, just stand back for now

Oh, stand by, that’s how

Won’t you stand back?

Stand back and stand by